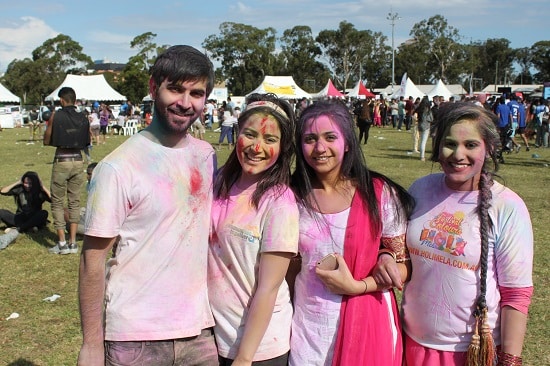 Reading Time: 3 minutesIt’s time for fun and frolic as the spring festival of colours takes over

A rainbow of colour streaked the sky above Blacktown Showground recently for the Festival of Colours Holi Mela. Held for the first time in Western Sydney, the event was a roaring success with more than 6,000 people in attendance.
“It was definitely more people than we expected!” one of the festival organisers, Nitin Madan told Indian Link. “It was not only Indians, we also had Australians and other communities involved.”

With a focus on having fun, three DJs hosted numerous 15minute long colour throwing sessions throughout the day. “The music was going as people were playing with the colour. It was a real party atmosphere!” Madan said.

The entertainment program of the festival featured dancing, singing and even a group Zumba experience! The cultural dance performances featured traditional garba, bhangra, gita and dandiya items as well as a Bollywood extravaganza. The choir from the local school also presented a few tunes.
It was non-stop party action from 11am to 6pm while the adults hurled colour at one another amid child-like shrieks of glee. But the real children didn’t miss out. A designated kids area was set aside to ensure they could participate in the colour throwing safely.

With more than 45 stalls, there was something for everyone in the family to enjoy. There were official games, including a tug-of-war competition – girls v boys – with the girls coming out victorious! Children’s rides, including live camel rides, helped to keep the littlies entertained while members of the NSW Police force and St John’s Ambulance also came to the party. “The kids really delighted in trying on the police hats and getting their photos taken,” Madan said.

Bikram Cheema, Indu Takher, Ravi Singh, Ashish Kumar and Nitin Madan are to be congratulated for hosting such an enjoyable Holi Mela. As the community grows in number, many large-scale celebrations are now cropping up in various pockets rather than at a central venue, enabling revellers to share the festive spirit closer to where they live.
This time round, the Holi revellers were joined by candidates in the upcoming state elections Raman Bhalla, Indira Devi, Edmond Atalla and Andrew Rohan, Shadow Minister for Citizenship and Multiculturalism Michelle Rowland and current member for Blacktown John Robertson.
Blacktown Mayor Stephen Bali also came down to enjoy the celebrations and pledged Blacktown City Council’s support for future Holi events.
For more photos from the Festival of Colours Holi Mela Blacktown CLICK HERE