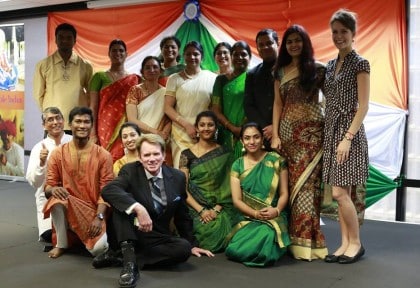 Celebrations for India’s 68th Republic Day were conducted with great fanfare at the Consul General’s office in Perth. Attended by more than a hundred people, it made a wonderful impact on all those present who miss their country of origin. A flag hoisting was followed by a strong and dutiful opening speech by the Consul General of India in Perth, Amit Kumar Mishra. He extended his warm greetings to Indians living in India and abroad.

Primarily, he paid tribute to the brave hearted soldiers who sacrifice their lives safeguarding our national borders. He also stated that India is the second largest reservoir of scientific and technical manpower, has the world’s third largest army, is the sixth member of the nuclear club and the tenth largest industrial power.
Despite the challenges in the global economic conditions, the Indian economy has performed well while growing at a commendable rate of 7.2 per cent.
Demonetisation, the most talked about topic of 2016, was discussed here too. It caused interruptions in day-to-day transactions but will eventually lead to a more transparent economy overall, he said.
“The object of government in peace and in war is not the glory of rulers or races, but the happiness of the common man,” Mr Mishra said. Indeed he said, happiness and people’s wellbeing should be the touchstones of public policy.

A healthy democracy calls for conformity to the values of tolerance, patience and respect for others. Mr Mishra also highlighted the flagship programmes of the Indian government like Swachh Bharat mission, establishing more and more Aadhar cards, Digital India Programme, and the Skill India initiative. He concluded by discussing how we still have to work hard to ensure we alleviate poverty, improve food security and agricultural sector, help children and women, and improve employment opportunities in a fiercely competitive world.

The other performance was by the Perth Neyvelli Shishyagulam comprising Indian Carnatic music enthusiasts on both vocals and instruments. They sang Vaishnav Jan to and the Tamil Tarukkulla Nalla Nadu, in praise of India. The room stood still.
The programme ended gracefully with Indian savouries to be enjoyed.