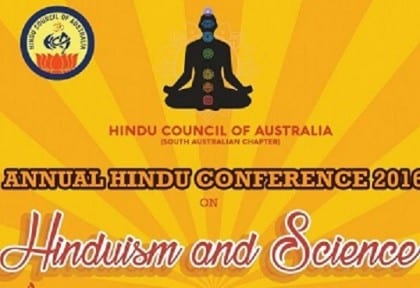 “Let noble thoughts come to us from all sides and all directions. May the Gods bless us every day.”
This is how Dr Dilip Chirmuley of the Hindu Council of Australia (SA Chapter) began the first Hindu Conference in Australia in Adelaide.
The Hindu Council of Australia was established 20 years ago and represents Hindus at both Federal and State Government levels. The SA chapter was established only two years ago, but has been very active organising various activities and festivities in Adelaide.
The theme of the conference was Hinduism and Science. The speakers were from different walks of life and gave interesting perspectives to show parallels between modern day science and ancient Hindu texts.

Dr Viral Jani welcomed the gathering and started the proceedings with Komal Shah as his co-MC. After the lighting of lamps and a short prayer, followed by some general information from Dilip Chirmuley and Dr Nihal Agar about the Hindu Council, the conference kicked off with excellent presentations by three young men from BAPS Swaminarayan Sanstha about the contributions of Hindu rishi-scientists to science and mathematics.
Dharav Brahmbhatt, a third year Mechanical Engineering student spoke about Aryabhatta and Bhaskaracharya.
Kevin Tandel, a Year 12 student, spoke about the contribution of Maharishi Bharadwaja to aeronautics. I admired the way he tempered his talk saying whether we believed aeroplanes existed in ancient India or not, the scientific calculations and information regarding aerodynamics and aeroplane construction in Bharadwaja’s writings dating back to 400BC cannot be lightly dismissed.
Atmaj Dashondi spoke about Shushruta and Charaka’s contributions to the field of medicine. Compared to these well-researched presentations, it was a bit disappointing that last speaker from this group spoke about the power of prayer without giving much scientific basis for his thoughts.
Then came two men of science and medicine. Dr Rengasami’s talk was on the parallels between Vedic philosophy and modern scientific principles. Dr Rengasami, a Senior Research Fellow at Adelaide University, briefly discussed the First Law of Thermodynamics (that energy cannot be created or destroyed, only transformed) and Quantum theory, and drew parallels with Vedic philosophy. He focused primarily on the Vedanta school of thought, mentioning Adwaita, Dwaita and Vishishtadwaita philosophies with a definite leaning towards Adwaita as the ‘Vedic’ philosophy.
Dr Gaurang Prajapati, a medical practitioner, gave an excellent talk about the science behind yagnas. He had some very interesting information regarding the vibrations that are released during Vedic recitations, and the neurophysiological effects of mantras, particularly the Agnihotra.

Next, Damien Outtrim, President of the Multi-faith Association of SA and a Brahmakumar, gave a beautiful talk on Rajayoga meditation. He spoke about its healing benefits, its role in management of psycho-social stressors, medical testing in relation to coronary artery disease and such. He also led all through a short guided meditation.
Snehal Thacker, an accountant by profession and a Ram Charit Manas kathakar, spoke about the scientific inferences in this great work by Sant Tulsidas. He clearly showed up the sections of the Tulsi Ramayan where the dohas refer to scientific principles. An in-depth study of the Ramayan appears to reveal that our ancient scientists knew about cell biology, anatomy, medicine and more.
The last speaker, Prof. Himanshu Pota, who gave concluding remarks, made it very clear that this was the need of the day: an extremely good understanding of even a small aspect of Hinduism through rigorous research and analysis. He made an impassioned plea to everyone to make sure they read up or conduct a thorough inquiry into questions regarding our religious texts or philosophy.

All in all, it was a very interesting conference. Chirag Trivedi, one of the organisers, spoke to Indian Link saying that the objectives of staging the conference were to give thought to Hinduism as an ‘intellectual’ religion – one that appeals to the intellect as well as the spirit. “Most of the people follow rituals to get something in return, but actually we see Hinduism as a guide to live a very good life through physical and mental health,” he said. “As well, our youth are being nurtured in the western education system and they ask many questions about Hinduism and its many rituals.”
He added that another objective was “to provide a common platform where different Hindu groups work in the same direction. Hence this Conference had speakers from four different organisations and shared common thoughts”.
Apart from an annual conference, the Hindu Council aims to organise regular study groups or discussion forums where a topic is given out in advance and everyone can research it and bring their information to the group. All information would be from reliable sources and all the participants would get a really good understanding of the topic.