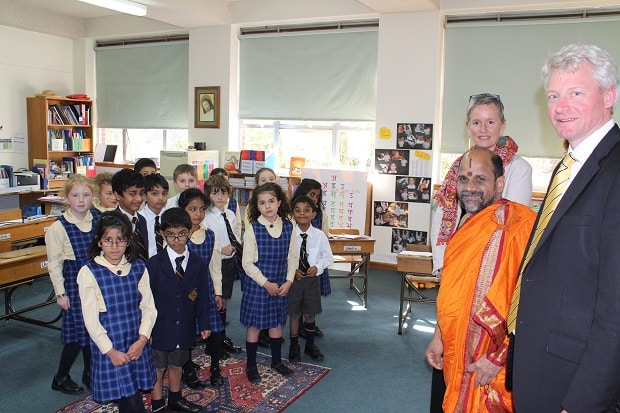 While NRIs today have access to an increasing number of temples that employ priests from India and offer an increasing array of religious practices, what is sorely missing is the absence of visits by Swamijis or heads of religious institutions, also called Mutts.

In some Hindu sects it is believed that one should not travel across the oceans. While with over 30 million NRIs and many more millions visiting abroad regularly, this is practiced more in breach than in adherence, it is still the case that Swamijis from very old religious institutions rarely, if at all, go overseas.

One Swamiji thought otherwise. He believed that his primary mission in life is to go where the devotees are, irrespective of where they are in the world, and offer spiritual advice and support. Amidst stiff opposition from fellow Swamijis and some in the community, he started making regular overseas visits. This brave and far sighted Swamiji is Sri Sri Sugunedra Tirtha from Puttige Mutt in Udupi, Karnataka.

Udupi is a famous temple city where Shri Madhwacharya, the proponent of Dvaita philosophy, set up the Krishna Mutt in the 13th century. He handed over the administration to 8 disciples with their own mathas (monasteries). To this day, all the eight Mutts take charge of the worship and administration of Udupi Krishna temple for two years on rotation

Puttige matha is now headed by its 30th pontiff SS Sugunedra Tirtha Swamiji. He is the President of the World Conference on Religion and Peace and heads over 35 religious and spiritual institutions in India and abroad. In line with his belief that the whole world, not just India, is a holy land and that devotees, no matter where they are, deserve to be served, he has set up three Krishna temples in the USA and one in Canada.

Thanks to the valiant efforts of Sri Raghavendra Seva Samiti (SRSS) in Melbourne, SS Sugunendra Theertha Swamiji visited Australia last year. This year he made his second visit for over a month in March-April and met devotees in Perth, Sydney, Canberra, Brisbane and Melbourne.

What thrilled the devotees no end was that they got to see and worship the 750-year-old Vithhala idol that has been handed over by Sri Madhwacharya and worshipped ever since at Puttige Mutt. The Swamiji was accompanied by priests who brought the same religious fervour and atmosphere that one gets to see only in ancient Indian temples with their rendition of mantras and veda pathana. The cook that came with Swamiji rounded up the experience with the famous Udupi cuisine.

Another highlight of Swamiji’s visit was his informal Q & A sessions where he replied to all the questions, especially from youngsters, with patience, affection and deep knowledge. He also met local Australians at many functions organised by various educational institutions in his honour. To the delight of SRSS, the organisers of his visit, the Swamiji has decided to set up a Krishna temple and Sri Raghavendra Swami vrindavana in Melbourne in the near future.

For more information about the mission and activities of SRSS, visit