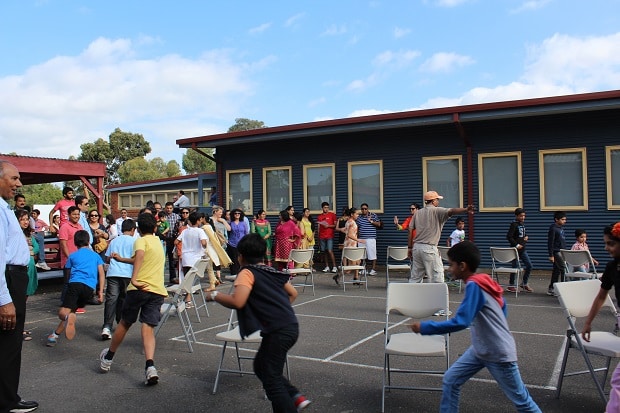 Hindi Niketan’s annual celebration of India’s Republic Day and Australia Day kicked off in style on 19th January, with a family day of culture and sports activities at the Scoresby Primary School. Held later in the afternoon than in previous years, the event was a success.

The opening address was given by General Secretary of Hindi Niketan Dr Atit Bhargava. Dr Bhargava noted that Hindi Niketan was the only organisation to have celebrated India’s Republic Day and Australia Day in Victoria for the past two decades, and fittingly, the function started with the Indian and Australian national anthems.

Proceedings continued with a quick quiz on the political and cultural heritage of Australia and India; one smart youngster was able to name India’s national flower as the lotus, but “umms” and “aahs” ensued when they were asked how many petals it has! Children and adults were encouraged to join in, although as Hindi Niketan president Dr Sharad Gupta jokingly pointed out that in keeping with Hindi Niketan’s focus on youth and their education, quiz prizes were reserved for the younger contestants! As the oldest Indian organisation in Victoria, Hindi Niketan aims to promote Indian culture through the learning and teaching of Hindi language.

Dr Gupta then followed with a warm welcome speech, and then introduced the cultural program. The audience were serenaded by the very talented Amitabh Singh, based in both Melbourne and Mumbai, who charmed with several patriotic songs. Following this was an impressive dance performance by local talent Anindya, and then a performance of O Palan Hare by an adorable 10-year-old Khushi Sharma.

Khushi’s father Neeraj then delighted with his musical skills, before a speech from Ms Nicole Seymour, local councilor for the city of Knox. Ms Seymour praised the virtues of Indian culture, and espoused the benefits of cross-cultural exchange between Indian Australians and wider Australian society. She urged the Indian community to keep sharing their culture, and spoke of the spirit of friendship in her local community and at the Scoresby Primary School.

The day’s program then moved outside, with a round of musical chairs for the children, followed by the adults. It was perhaps befitting of an India-Australia function that when some technical difficulties were experienced with the music CD, the cricket commentary was switched on and contestants promenaded around to the familiar sound of leather on willow.

Running races followed; Separate categories were organized for boys and girls, ages 6 to 12, and for ages 12 to 25, however the ultra competitive spirit seemed to emerge when the ‘veterans’ (aged over 45) had their turn at sprinting across the line! A game of dodgeball and a few more activities later, and it was time for a delicious dinner, courtesy of Singh’s Gourmet Takeaway and Hindi Niketan.

The event concluded as a celebration of the cultural commonality between our two nations; the generosity and epic history of India, and fun-loving and welcoming Australian spirit.