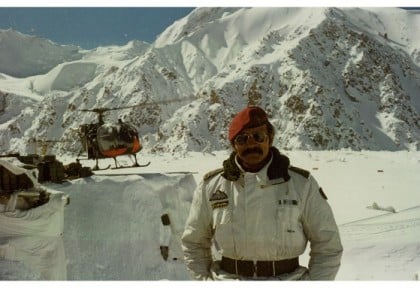 Combining technology with tactics, he has soared to heights that have landed him many coveted international accolades throughout his career. Most recently, Melbourne’s Lieutenant Colonel (Ret’d) Dr Arvind Sinha received the World’s Outstanding Aerospace Engineer Leadership Award from the American Helicopter Society (AHS) International. AHS is the world’s premier professional institution dedicated to vertical flight technology and advancement.
In addition to this award, Dr Sinha was bestowed the title of Honorary Fellow in May 2016. According to the AHS, the title is granted to society members who have shown exceptional leadership, or made innovative or other meritorious contributions, that have significantly advanced AHS International and the vertical flight community.

During his distinguished career, both in India and Australia, Dr Sinha has received numerous awards, spanning military operations, design projects and academia, but this one, according to him, is “the crème de la crème”. Nominations for the prestigious AHS awards come from “across the globe” and it is the benchmark for leadership excellence in vertical flight technology.
According to Col. Samir Roychowdhury, Dr Sinha’s Guru while he was a cadet in the early 1970s at the National Defence Academy in India, and coordinator of Victorian Indian Veterans, Dr Sinha is most sought out in the world in his field of Aerospace Engineering. This international recognition is befitting of his contribution to aviation globally, said Col. Roychowdhury. “He has done us most proud with his achievements in a specialised, niche rotorcraft technology.”
Dr Sinha is currently the Director of Engineering, Helicopter Systems Division, Capability Acquisition and Sustainment Group (CASG), at the Department of Defence, Australia. Working on Australian Army and Navy aviation platform and systems technologies, he is an expert in Tactical Aerospace Systems, covering helicopters and unmanned Aircraft.
He is the Founding President of the AHS Australian Chapter and is on the AHS International Board-of-Directors as Director of the Asia-Australia Region, and the International Helicopter Safety Team as the Australian lead. He was also a former Professor and Director of Aerospace and Aviation Research Centre at RMIT, and now holds the title of Professor of Aerospace Design at Monash University.

Speaking to Dr Sinha on his return from the International award ceremony held in Virginia, USA, it is clear that he has an array of high level competencies as well as an impressive personality. From shero-shayari (couplets and poetry) to yesteryear music, his hobbies are eclectic and filled with joie de vivre. So is his customary pre-dinner drink. “I prefer to keep an ordinary public profile, as one amongst you all, however, I enjoy meeting people, provided one’s stature and position is kept at rest,” said Dr Sinha. In few words, in an impromptu shayari/poetic format he said,
Mili hai mujhe kuch gine saanse,
Jeeta hun main har saans maje lekar.
Who bhi kya jeena hai, har waqt rote hue,
Maza tho  mein leta hun, aasoon ko hasi me badal ke.
Kabhi, mere makhane ke mehfil mein aakar tho dhekho,
Har kadam zindagi ka, tho aur har saans jeena ka,
Mazaa he kya hai.
As an Active Combatant Paratrooper, Dr Sinha invests considerable time and energy in his fitness and health.
“I go to India every year in November, to para jump and sky dive with my Army Officers – comrades half my age!” said Dr Sinha with a chuckle.
Prior to his early retirement from the Indian Armed Forces, Dr Sinha commanded elite units of Electronic Warfare and Airborne Special Forces. As a young Major he was posted to command an engineering unit on the high-density altitude Siachen Glacier as part of Operation Meghdoot in 1984. The Glacier region is the highest battleground on Earth, at a height of over 6,000 metres (20,000 ft).
“An average stint there does not exceed 90 days due to the harsh conditions that test human endurance,” Dr Sinha recalled. “However, my tenure was specially extended to two years for operational reasons, and my command was honoured with a ‘Special Operations Order.’”

Speaking of his move to Melbourne, Dr Sinha shared that he was the first person, and probably the last, to migrate overseas in his entire family.
“I belong to a proud Kshatriya Rajput family with a tradition of serving in the Indian Armed Forces. There was no thought of moving overseas. However, I was selected based on my IIT Masters work in Helicopter Design for a Doctoral Project-based application research under an Australian Government Sponsored Scholarship with RMIT University,” he said.
“A special approval was granted by the Indian Ministry of Defence enabling me to proceed overseas for over three years, despite being an active duty officer.”
After his Doctorate he returned to India to become the Dean of the Faculty of Aviation in Military College of Electronics and Mechanical Engineering. He subsequently rose to the rank of Lieutenant Colonel. In 1999 RMIT University offered him an opportunity to continue his helicopter design work as a Senior Researcher and Manager Aerospace Design and Commercial Office on a project with Australian Defence Science and Technology Group. He was granted retirement from the Indian Army and he moved to live and work in Melbourne with his wife and daughter.
“My circumstances are different to other migrants as I had no break in continuity of my profession. I adapted to balance the two (Indian and Australian) professional styles, way-of-life, cultural outlook, and accepted tough challenges,” Dr Sinha said. “With the support of both the Indian and Australian Governments I achieved global success as an individual and contributed to the people and nations at large in the field of Aerospace. Today I walk with pride and humility and am extremely content with my profession and life.”