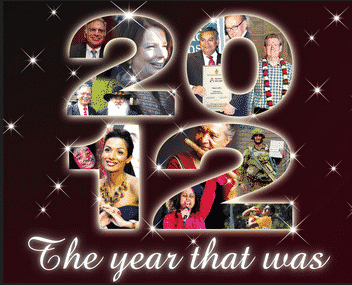 Reading Time: 7 minutesRAJNI ANAND LUTHRA looks back at the year that was, for Sydney’s Indian community

The Indian community is the fourth largest migrant group in Australia, Census data revealed this year, with Hinduism the largest growing religion. As our numbers increase, so does our clout on a variety of fronts – and not merely as a viable vote bank. It is hardly surprising then that it has been a busy year for the community, making strides in different endeavours. Here’s a look at the major trends within our community this past year.

At the highest levels, the main issue was related to the relationship between our country of origin and the one we now call home. Have the conflicts of the past few years irrevocably changed things for the worse, or is there opportunity to build bridges? The Australian government certainly seems to believe the latter is true, given the number of high-profile visits to India. PM Julia Gillard’s own tour will probably be remembered by the wider community for that much-replayed stumble on the lawns at Rajghat – and maybe for the somewhat controversial announcement of an Australian honour for Sachin Tendulkar – but many in the Indian community here who waited to see more on the uranium front were left disappointed. Not much progress has been made on the issue ever since that change of track announced last year. It would seem that from India’s perspective at least, this will continue to be the deciding factor in the normalisation of relations. The Australia India Institute’s ‘Taskforce Perceptions’ report released this year, made some 30-odd recommendations for both nations towards the same end in a variety of other fields, and at best, make up a ‘softer’ strategy.

There were a fair few Indian links in the mainstream this year.

The cricket tour early on was eminently forgettable, marking the beginning of the slide for the Indian team towards the crisis it finds itself in today.

What was not so disappointing however, was the launch later in the year of the government’s Asian Century White Paper in which provisions were made for increased opportunity in our schools for the learning of Asian languages including Hindi. (Mala Mehta no doubt broke into an impromptu bhangra at the announcement: she is well-known in the community for her crusade for Hindi language learning in our schools).

There was also much discussion in the community about two mainstream TV shows Bollywood Star (SBS) and Dumb, Drunk and Racist (ABC).

Wish the same could be said about this year’s Sydney Film Festival at which India was a special theme: there were simply not enough takers from the community, even though the line-up of films included some hot new offerings such as Gangs of Wasseypur. (The hoi polloi will not be stimulated unless there is a Bollywood star involved somewhere). The mainstream however, lapped it up – just like Parramasala later in the year. With Parramasala strangely, there was not much excitement within the community in the lead up to it, but once it was on, it turned out to be really quite enjoyable: something for the organisers to address perhaps.

Perhaps the year’s most significant trend for the community has been the flurry of India-related activities on our university campuses, welcome reports after the students’ crisis of a few years ago.

Worthy of special mention was the inaugural Australia India Literatures International Forum organised by the UWS’s Mridula Nath Chakraborty. We have had large-scale events in film and cultural shows, even art exhibitions, but this first attempt at a writers’ fest, which attracted English as well as regional language writers from India, some of the best from Australia, and some of the brightest from the Indian-Australian community, deserves special kudos. It wins Indian Link’s ‘Event of the Year’ award!

Early in the year UNSW organised its inaugural Gandhi Oration. Aboriginal activist Patrick Dodson who attracted a huge crowd spoke not only about the Aboriginal community’s campaign for recognition, but also about Gandhi’s influence on his life and works.

A number of other seminars and workshops tackled Indian issues, ranging from a look back at the students’ crisis of 2009-10 (UTS), to marketing innovations in Indian business (UNSW).

Towards the end of the year, UNSW’s conferring of its highest honour to industrialist and philanthropist Ratan Tata became a matter of great pride within the Indian community.

Even a Bollywood movie held a special screening on campus this year: the film From Sydney With Love, made by a UNSW alumnus attempted to get the international students’ scenario down pat for Indian audiences, but unfortunately sank without a trace at the box office.

And oh, we’re beginning to bust with busts: while UNSW was first off the mark with its bust of Mahatma Gandhi a couple of years ago, this year Macquarie Uni got a Tagore bust and UTS got one of Rajiv Gandhi. The call is up now for Sydney Uni and UWS to join the bust party.

A new dimension was added to the mela milieu this year. The Hindu Council of Australia’s Deepavali mela saw a smaller but very successful spin-off in the build up to its larger event, bringing the Festival of Lights to Martin Place in the CBD. Hope this becomes an annual affair.

UIA’s India-Australia Friendship Fair had some celebrity attendees in 2012, with PM Julia Gillard and Leader of the Opposition Tony Abbott taking time off from squabbling and name-calling to share stage space in front of the Indian community.

Other than these two facets, the overall mela scene was pretty humdrum, with nothing new on offer either at the BVB Holi Mela or at the Vaisakhi and Janmashtami fairs. A new entrant on the scene has been the Tamilian Chittirai fest, bringing together Tamil-origin communities from across the globe on the one platform.

The theatre scene was rather quiet, with only Vishwaas Productions’ Bhaktha Meera worth a mention (although we hope Vishwaas picks a more contemporary subject next year!)

The classical scene flourished with the usual Purandarada and Thyagaraja tributes, arrangetrams galore and the high-profile Swaraalaya weekend of music, in the tradition of the annual festivals at Chennai India and Cleveland Ohio.

Local muso Saarangan Sriranganathan’s Tamil number in collaboration with the great Hariharan, ‘She is a fragrant breeze’ became quite a hit.

The aging Hariprasad Chaurasia still managed to impress at Parramasala, but it was the younger and more contemporary artistes that touched a chord. The youthful and experimental musicians such as Susheela Raman, Circle of Sound, and even Sydney’s own L-Fresh The Lion, all brought the house down.

In dance, Hamsa Venkat’s Kavyam, a dance drama on poetry, was the standout event from among local artistes, while among the ‘imports’, Shobana’s Krishna was top-of-the-pops.

The Indian Film Festival attracted its fair share of attention as well, thanks to the comely Malaika Arora Khan and the hugely talented film-maker Rituparno Ghosh.

Another observed trend has been the flourishing spiritual scene: a steep rise was observed not only in terms of the number of programs available but also in the number of people involved. The annual padayatra from Sydney to Wollongong, larger than ever before this time, looks set to become bigger in coming years. BAPS began the grand construction of their temple, and a Lord Ayyappa shrine was opened by the Malayali community. Hindu youth got better organised with their conferences, seminars and scripture classes, and informal lecture sessions took on greater popularity. The Catholic community felt very privileged to have the relic of Goa’s St Xavier visit in a special tour.

A number of our community members were listed again in the Australian government honours list in various fields including science and community work. The octogenarian Minna Batra became the first Indian-origin woman to receive the prestigious AM honour.

Cricketer Gurinder Sandhu who played for Australia’s Under-19 squad and continued to make his mark in the Twenty20 scene, did the community proud. We look forward to seeing more of you in coming years, Gurinder.

Thumbs up also to…

The government’s announcement of travel concessions to international students; easier visa procedures for visiting parents; the growing interest in mainstream political participation such as with Local Councils; Cricket Australia’s Hall of Fame honour for Indian cricketer Rahul Dravid; Bank of Baroda’s entry into Australia; the South Asian gay community getting better and better organised; Indian artist Subodh Kerkar for his striking exhibit The Chilly at this year’s Sculpture by the Sea, and for the Indian Link media group which brought home three of the nine awards at the inaugural Multicultural Media Awards event, including Multicultural Journalist of the Year award for CEO Pawan Luthra.

The general apathy showed by large sections of our community towards cultural events in the mainstream; the continued splitting up of our organisations which gives the community a disunited look; small businesses operating under the guise of ‘community media’ banner.

Our top stories from this year

An analysis of the Indian cricket tour of Australia

Things our dads do that embarrass us

Did you hear about the neighbours?

Excuse me, your border is perforated

Devotees of various temples join together in a 75kms walk that tests their physical, mental and religious prowess

The Indian U-19 team returns home with the Cricket World Cup trophy to many, many accolades..and one brickbat!

The things that Indians love: a joy – and sometimes a challenge – to discover