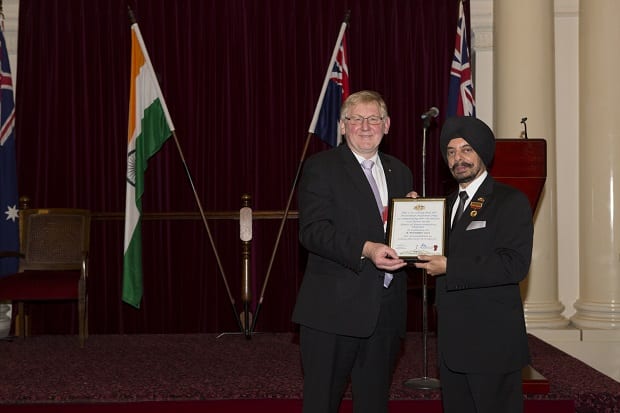 The history, heritage and people of India were celebrated in style on August 15 at the Victorian Parliament House in Melbourne. The Australia India Society Of Victoria  (AISV) and the Australian Indian Business Council (AIBC) jointly organised this gala Indian Independence Day event. Several important local politicians attended the celebration to mark the bilateral relationship with India, and to pledge support for the Indian community. All of this was well timed, prior to the federal elections.
Among the dignitaries present was Shadow Immigration Minister Scott Morrison; Leader of Opposition Danielle Andrews; Former ALP leader Martin Ferguson; Parliamentary Secretary to Kevin Rudd, ALP’s Alan Griffin; Minister for Multicultural Affairs and Citizenship and Minister for Energy and Resources Nicholas Kotsiras; Member for Footscray, ALP’s Marsha Thompson; and Member for Bentleigh, Elizabeth Miller; and Tim Pallas, State MP for Tarneit, Shadow Treasurer and Shadow Minister for Employment. Also present were Dr Gurdip Aurora, President of AISV; Vasan Srinivasan, President of FIAV; Ravi Bhatia, President of AIBC (Victoria); Arjun Surapaneni CEO, VIT (Victorian Institute of Technology); Nitin Gupta, Ministerial Adviser; Rakesh Kawra, Indian Vice Consul; and Raj Kumar, Acting Consul General of India in Melbourne.
It was a remarkable feat to get people to participate with enthusiasm on a weekday; however AISV and AIBC seemed to pull it off with success. According to Dr Aurora, the decision to hold this event on the ‘actual day’ was made on the suggestion of late Consul General of India in Melbourne, Dr Subhakanta Behera. “Not long before he passed away, Dr Behera lamented the trend in Australia to celebrate Independence Day and other national events over weekends.  According to him, a significant event on August 15, the day of Indian independence should be celebrated on the real day, not before or after,” said Dr Aurora, sharing the reason for holding the event on a Thursday. He thanked the managing committee of AISV and AIBC for supporting him in fulfilling Dr Behera’s wishes.
It was predominantly a networking event sprinkled with some entertainment in the form of a Bollywood medley and a fabulous Ukrainian traditional dance. The agility of the male dancers was matched equally by the elegance of their female partners, and it made a refreshing change for those present to witness the culture of another community. The bulk of the evening was made up of speeches from dignitaries, interspersed with interesting anecdotes from the MC Manpreet Kaur from SBS Punjabi radio.
Several speakers mentioned the shared history of Indians and Australians during World War II and claimed that the bonds between India and Australia go beyond cricket and economic alliance. Ravi Bhatia, President of AIBC spoke of the resilience of the people of India and took the opportunity to introduce and thank the Management Committee of AIBC, who according to him, have done a sterling job of growing Indian Australian business relationships. Scott Morrison spoke about the important role that the Indian community has played in Australian society. “The opportunities in IT, finance, tourism and education industries further cements the need for association of Australia with India, and there is no doubt that India is critical to the economic future of Australia,” said the Minister. He thanked the Indian community for a partnership that is growing and benefitting both nations.
Minister Kotsiras managed to stir up the audience with his tongue in cheek comment about India being the second best cricketing nation in the world. On a serious note, he reflected on the achievements of India as a nation in being a democratic multi-faith and multicultural nation. According to him, while there has been a lot of work done to support new migrants, the challenge lies in thinking of future needs of the rapidly growing Indian community. The challenge is to get the Indian community in Australia together as a force, to fulfil future needs like building a nursing home for Indians in Australia. He said he was wiling to support the efforts of the community, and they could continue to organise functions and cultural shows and events; however, a solution needs to be found to unite the community to address the needs of the future generation. Opposition Leader Daniel Andrews ended the speeches by offering a few brief comments. He praised the contribution of the Indian community, in particular their efforts in the medical, healthcare sector in Victoria and the broader nation. The event concluded with a vote of thanks from Monica Raizada, the dynamic Vice President of AISV.