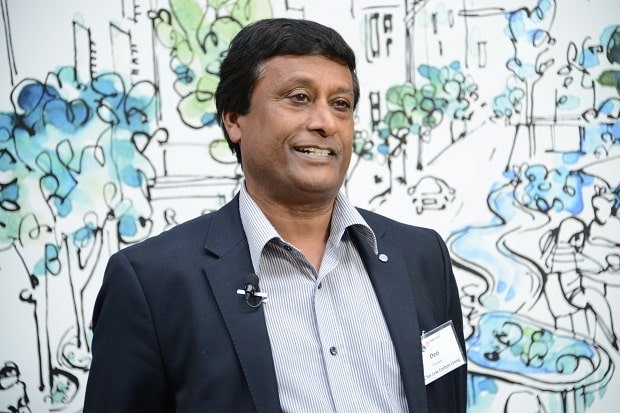 Reading Time: 3 minutesFor distinguished service to architecture, particularly in the field of sustainable urban design, as an academic and researcher, and to the solar renewable energy sector

Professor Deo Prasad, CEO of the Cooperative Research Centre for Low Carbon Living (CRCLCL), was appointed as an Officer (AO) in the General Division of the Order of Australia on Australia Day 2014. Prasad’s contribution towards sustainability and the development of greener cities was recognised not just in his line of duty, but for his wider involvement nationally and internationally, in this area.

The 59-year-old academic from Fiji moved to New Zealand and later to Australia, where he has been living for the past 30 years.

Prasad has published over 250 journal articles and six books, and received millions of dollars in competitive research funding. As an ambassador for Business Events Sydney, he promotes Sydney as a destination for high-end scientific events. He is also a Green Globe Award winner, and winner of the Institute of Architect’s Architectural Education Prize. He serves as a member of numerous international boards and committees, including those in Canada and Seoul, and chairs the Asia Pacific Global Civil Society Forum for UNEP.

“I started my career as an architect, but a turning point in my life led me to study sustainability,” Prof. Prasad tells Indian Link. “I was overseeing an infrastructure project on a Fijian island where the displaced Banaban people were relocated from their island home to make way for mining by the British Phosphate Commission. These people who were fishermen and farmers, found it hard to assimilate into their new environment, leading to many socio-economic problems. Thinking about the impact created by this newly built environment led me to come to UNSW for further study”.

After a Masters in Science and then in Management, Prasad did a PhD in Engineering and continued to work at UNSW, where he has continued teaching sustainability courses since many years.

Prasad says, “The built environment is responsible for 40 per cent of energy use. This sector is very disparate, always at the mercy of the economy. They don’t get time to innovate, as they move from one project to another. So I put together a large proposal and convinced the industry and government to put in more than $100 million”.

His efforts came to a head in 2012, when CRCLCL was established.

Research sometimes can be far displaced from the needs of reality and consigned to papers that gather dust in university libraries. What is laudable about CRCLCL is that this centre brings together 50 industry partners to join forces to find real-world solutions.

Prof. Prasad notes, “Researchers and organisations tend to focus on one element of a larger problem; but the reality is that creating buildings and cities is a multidisciplinary process, and so we need to approach it holistically”.

39 varied and interesting research projects are currently running at CRCLCL which include looking at modular construction for multi-storey buildings, energy use of domestic appliances, reducing emissions in the school sector, integrating solar technology into buildings and creating living laboratories of products, buildings and communities, where low carbon can be tested and showcased.

For people who think that higher levels of consumption and waste mean that we are doing better in life, he has a message.

“Quality of life is not dependent on more consumption. Well-designed homes are not necessarily large homes, but are appropriate to the size of the family. We can have a high quality life by living in harmony with nature”, says Prasad.

Making green buildings a norm rather than an exception, is Prasad’s dream.

Imagine innovations such as roofing materials or building cladding that double as solar panels! The world of low carbon will not seem so far-fetched when this becomes a reality.