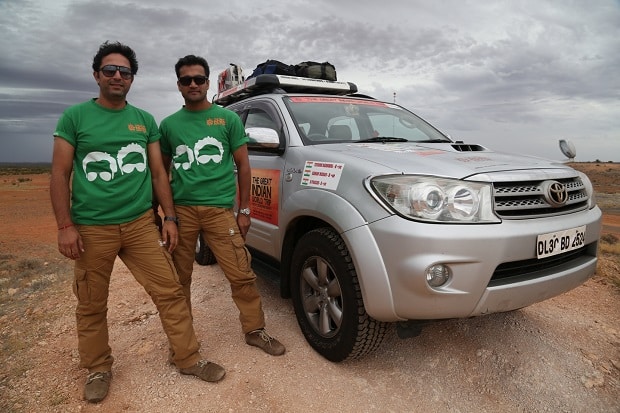 A trio of enthusiastic young men undertake a staggering journey across the globe in a 4×4. By AVI CHANDIOK

Ever since Galileo’s discovery that the world was indeed round, people have dreamt of circumnavigating the globe. Over the centuries many such journeys have been made by land, sea and air, and each has its unique features. Currently in Australia are three young men from India who have embarked on an epic journey to travel round the world by road. It might seem an insane fantasy, but the Great Indian World Trip is well and truly on its way. The drive will cover a staggering 70,000kms on roads across the globe that range from being smooth as silk to unpaved ones that will truly test the driving skills of these young men, and the 4×4 itself. The days and nights will unfold across the skies of 50 countries and 6 continents, with our intrepid young men meeting and associating with different peoples, races, languages and foods. Surely it takes a steely toughness to undertake such a project.

Tushar Agarwal, Sanjay Madan, Prasad and their trusted 4WD form the team of this world trip. The stated motivation for the journey is an attempt to challenge the common man’s definition of the NRI. It’s an endeavour to see beyond the glitz associated with the concept of the NRI. The team intend ‘…to interact with such Indians settled the world over and find out how life is treating them’. Ultimately they wish to get an idea of how NRIs are faring in their chosen lands. So why do I get the sneaking feeling that it is the lure of an exciting adventure with all the risks involved in doing something breathtakingly huge, that is the true motivation for this enormous journey.  With such a venture full of challenges, it is easy to envisage the rush of adrenalin one might feel as one starts to wonder whether the project will succeed. There can also be the desire to test oneself. Will the body and mind be able to endure the strenuous schedule? Has the forward planning accounted for all the contingencies that might arise? To answer these questions can itself become a reason for undertaking such a journey.

The obvious question is – will the Great Indian World Trip succeed? Of course, one can never predict the future but it’s very unlikely that our team will be the proverbial bunnies caught in the headlights of a 4×4. The team’s track record speaks for itself. Previously they had driven 12,000km from London to Delhi in 51 days. They have been part of the Indian team at the ASEAN India Car Rally 2012, from Indonesia to India. One endearing achievement was the record-setting drive in the tiny Tata Nano (heated?) to Khardung La Pass at 5600m on the highest motorable road. There have been many other record-breaking drives high up in the Himalayan ranges including to Mt Kailash and Mansarovar Lake, and down on the plains. The team has also officiated in the most popular car rallies in India including Desert Storm and the Formula 1 race. Who would bet against Tushar, Madan and Prasad completing their current world trip?

Often it is wise not to get too carried away by one’s own lifestyle and the high-5s associated with it. The glamour and adulation that comes with undertaking a drive round the world can easily go to one’s head. Those less fortunate and not in one’s elevated circle can often be forgotten and left behind. So it is very much to its credit that The Great Indian World Trip has taken up the cause of the Guru Vishram Vridh Ashram in Badarpur, Delhi. This Ashram takes in the sick, the destitute, those with mental and physical ailments, and provides a place of safety and shelter for the elderly. These young men are spreading awareness of the ashram, and providing a platform for the public to make donations to it via the Ashram’s website.

The drive has already passed through Myanmar, Thailand, Malaysia and Singapore, covring nearly 7,000kms. “The 17,700km drive across Australia is an attempt to create a Guinness World Record,” confirmed Tushar. At the time of going to press, the trio was heading to Sydney. Later they head to other countries such as Tanzania and South Africa, which are home to wonderful wild life. Some countries being visited include those with political tensions such as Kenya, Columbia and some in Central America. The route goes from Alaska in the very north, to the southern-most tips of South America and South Africa. From Alaska and California in the west to Sydney, far away in the east. So many hours to sit in the driving seat as the world goes by. So many chance events that may take place with the joy of the accomplishment as it unfolds.

In the near future I expect to meet the trio to learn more about their stories; but in the meantime, I wish our adventurers well. To quote from their website www.greatindianworldtrip.com: ‘Roads. No Roads. The expedition must go on. This can happen only when it’s steered by men who believe in it, powered by a machine that never lets them down and backed by a mechanism that keeps the engine roaring and wheels rolling. The Great Indian World Trip is no exception’.