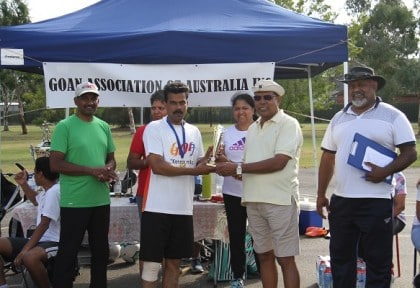 Saligao Foxes, led by former international Arnaldo Afonso who represented Goa at the Santosh Trophy and was a part of the Salgaocar Sports Club when they were the Champion Club of India, marshalled his team well throughout the tournament and was awarded the highest scorer and best player of the tournament.
In the finals against the highly-spirited opponents Sao Miguel de Taleigao, the veteran Arnaldo who in the past played against Posco Sports Club of South Korea, demonstrated his skills and experience well to guide his team to victory.
A total of five teams – Siolim, Fatorda, Goa United, Saligao Foxes and Sao Miguel de Taleigao registered to play. The winner’s trophy and all medals were sponsored by Clifford D’Costa, the Manager of Sao Miguel de Taleigao who played during this younger days in Goa and Dubai.
It was a fun-filled event with a lot high scoring matches. A total of 56 goals were scored in 13 matches. Arnaldo took the medal for the highest scorer by scoring 9 of those goals.


The ladies present on the ground participated in a penalty shootout contest. They were divided into two groups of 10 each, Hazel D’Souza and Venessa Afonso topped their respective groups and Hazel took the winners medal at the penalty shootout.
Jeremy D’Souza was awarded the youngest player at the tournament.
All matches were officiated by Terence Carvalho, a veteran of the inter village tournaments in Kuwait and the Middle East. Terence plays veterans hockey and represents Victoria at national level games.
The Chief Guest for the day was Anthony Lobo, a GAA member and the current President of the Lions Club of Mapuca in Goa. Anthony is involved in a lot of charity work in Goa always supporting the needy.
Earlier Goan Association of Australia in Melbourne President Gerard Lobo welcomed the gathering and thanked the participating teams for the support and urged the Goan diaspora in Melbourne to work to build a stronger Goan community.
- Advertisement -
Share
WhatsApp
Facebook
Twitter
Linkedin
Previous articleAsk Auntyji: IT envy and property shock
Next articleClassroom protest