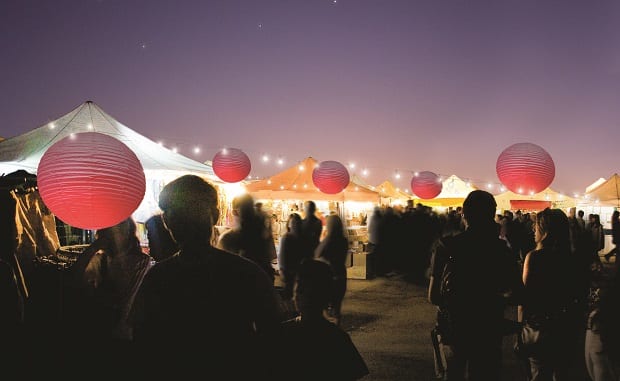 In the early 80s I developed a sudden (and shortlived) interest in Asian literature. It was then that I heard of a book called This Earth of Mankind by an Indonesian author. I think I read a review at the time, but that before the worldwide web and ebay existed, so it was very difficult to get unusual books, so I never read it! And now, just as suddenly, I recently saw a show based on the book!
Ontosoroh was performed at OzAsia Festival 2013 and was a collaboration between Indonesia and Australia, between Peni Candra Rini, composer, song writer and vocalist in the gamelan tradition (more about gamelan later), and Ade Suharto, choreographer and dancer from Adelaide, with three musicians from Surakarta in Central Java.
The show is about Nyai Ontosoroh, a Javanese woman who embodied all the complexities of 19th century Dutch East Indies, in the book by Pramoedya Ananta Toer, that is an allegory of Indonesia’s struggle at that time. Nyai was a derogatory title for an indigenous woman who became the mistress of a Dutch man during colonial times. Nyai Ontosoroh plays an important role in the transformation of Minke, the hero, from rich kid to radical nationalist. The book was also pivotal in changes in Indonesian culture, nationalism and, ultimately, gaining independence.
The play, Ontosoroh, incorporating exquisite music and dance, “is structured in several non-linear, yet intertwining segments”.  The dances by Ade Suharto were mesmerising. Mainly in the beautiful classical Javanese style, which is so similar to Odissi and other classical Indian dance styles, the performance also had a mix of classical western and contemporary movements. Her easy mixing of styles flowed beautifully, and seemed to fit the narration perfectly.
The poems sung by the female characters were in Javanese, and together with the beautiful dance movements, became the text itself. There were no other dialogues. Peni Candra Rini was the soloist performing in the female style of gamelan singing. Again, Peni combined traditional and contemporary styles in her singing techniques and the classical Javanese songs called tembang, which she wrote for the play were in both, colloquial and poetic Javanese language. And even though I had no idea what the words meant, the pathos in the singer’s voice and the other emotions that came across, needed no language to understand their meaning.
I should definitely not forget the musicians! Plenthe, the percussionist, was extremely good on a mridangam-like drum. In the first scene, I’m sure I heard teen taal flowing through his fingers and the tha-dhin-na-like beats helped me sit back, relax and enjoy the show. There was Prisha Sebastian, the violinist, who not only performed divinely, but was also physically a part of the show as he played the violin as a character, and not just as a musician in the background.
As they helped us visualize a morning scene with the flute imitating the chirping of the birds, the music sounded like very Assamese. The sort of tunes you would hear in a tea plantation in the North East. It was just incredible, the mixing of styles and notes.
And incredible too was an instrument I saw and heard for the first time, the gamelan. This is a musical ensemble featuring a variety of instruments such as metallophones, xylophones, drums, gongs, bamboo flutes and string instruments. It was just amazing, the music that flowed from this set of instruments, and Iswanto, the gamelan player, did full justice to the various instruments. These instruments are all built and tuned to stay together as one entity! Gamelan music is an integral part of Indonesian culture and I felt very lucky to see this instrument being played at the show.
The beautiful, flowing dances brought out the rasas of love and dreams in the beginning to desolation, and then a kind of rebellion at the last dance where silence was used beautifully. This was a beautifully controlled dance of strength and beauty, using a lot of yoga-like movements.
All in all, a beautiful show, made specially for OzAsia 2013 as a collaborative effort, I hope it tours around Australia and many more people will get to watch it.