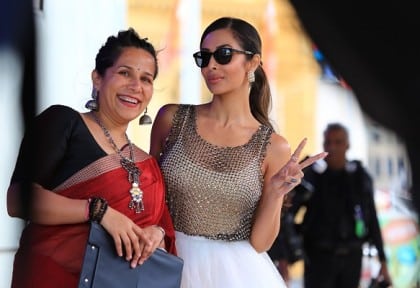 Melbourne played host to both the famous and the hopeful celebrities of the Indian film industry at the recently concluded Indian Film Festival of Melbourne (IFFM) 2016. With a focus on gender equality and liberation, the overarching theme for this year was ‘women’s empowerment’, and the program included a choice of over 50 broad ranging films in 17 languages. Now in its sixth edition, the format was predictably similar to previous years with the return of festival favourites with a few fresh tweaks.
Glitter and glam was prevalent at the gala awards presentation held at the Melbourne Recital Centre. ABC journalist Del Irani, as the MC, clad in a modern version of a sari, introduced the guests along with Festival Director Mitu Bhowmick Lange. The screenwriter of The Water Diviner Andrew Anastasios regaled the audience whilst taking the mickey out of the Australian Census debacle. Veteran actor Rishi Kapoor, who was awarded the Excellence in Cinema prize, spoke proudly about his family’s 88 years of contribution to the 104-year-old history of Indian cinema.

The highlight of the Awards Night was undoubtedly the beautifully executed Empowerment Concert by singers Suzanne D’Mello, Sara Haider and Shalmali Kholgade. With voices trained to produce enormous power on demand, the three singers revealed great strength of pitch and passion in their performances. Rachel Lim, a visually impaired singer from Western Australia, endeared herself to the audience with her talent. Rachel’s musical journey formed the subject matter of the award-winning short film entry by Josh Walker titled Out on A Lim.

Bollywood has a global appeal, judging by the many film fans among the Westpac Awards Night audience from non- Indian communities. Cinema lovers from the Pakistani community were visible and vocal in their support for Pakistani actor Fawad Khan and singer Sara Haider. There was a tense moment when someone in the audience started chanting slogans of ‘Pakistan Zindabad’ to be counter-acted immediately with chants of ‘Hindustan Zindabad’. Common sense prevailed, however, and the misplaced chants ceased as soon as they started.

The stars aligned as the film industry’s best converged at the IFFM Awards Night, ushered on to the red carpet by dhol players and dancers. The jury comprising of Jill Bilcock, Sue Maslin, Paul Ireland, Rajeev Masand, Andrew Anastasios and Simi Garewal picked Kapoor and Sons as the Best Film. The Festival’s Opening Night feminist film Parched won the Best Indie Film Award and its director Leena Yadav bagged the Best Director award for 2016. The Best Actor award went to Nawazuddin Siddiqui for his convincing portrayal of a psychopathic serial killer in Raman Raghav. He was one of the surprise guests at the Awards Night along with Sonam Kapoor who looked stunning in an Anamika Khanna creation and took home the Best Actress Award for her role in the high grossing film Neerja.

The film fervour continued as Melbourne witnessed a record crowd at Federation Square for the flag hoisting ceremony conducted by actor Rishi Kapoor, accompanied by his wife, yesteryear actress Neetu Kapoor (nee Singh). Emotions ran high as the tricolour was unfurled by the actor alongside Indian High Commissioner Navdeep Suri. In his characteristic impassioned speech, the enormously popular on screen loverboy of the 1960s and 70s spread the message of peace and love. This was followed by the Telstra Bollywood Dance Competition which saw another sea of crowds at Fed Square to witness a vibrant contest of dancers from across Victoria and the other states of Australia.

There was no dearth of talent as the stage came alive in a display of colours, vigour and awe-inspiring energy. There were gaudy sequins and lycra galore as the contestants stepped through medleys of kitschy song and dance numbers synonymous with Bollywood. Outstanding performances came from the Provocative Dance group, Mandy Dance Group, the Bhangra group and individuals like Gerard, Afzal and Cyrus. Natya Bollywood, Dancing birds; JJ’s Dance Group, Bollywood Dimensions and Cyrus were declared winners in the various categories. In a Festival first, celebrations were also held at Harmony Square in the City of Dandenong with a live cross to the Telstra Bollywood Competition taking place at Fed Square.

There were a few hiccups at the dance competition when judges Malaika Arora Khan and director Shakun Batra arrived late, leading to some disgruntled concerns about fair judgement. Bollywood’s dancing sensation Malaika Arora made up for her late arrival by mingling with the winners for selfies and shaking a shapely leg or two with the little ones. Best Actress awardee Sonam Kapoor was allegedly also caught up in Melbourne’s CBD traffic while her fans waited patiently at Federation Square to catch a glimpse of the supremely chic actress. When she finally arrived, the selfie brigade went into overdrive trying to capture some star style to be instantly shared on social media.

Running on Indian stretchable time was a somewhat recurrent theme as Fawad Khan also apologised for being late for the Awards Night presentations. In his dreamy voice, the debonair star cited diabetes and the need to have an early meal as the reason for his delay and the audience instantly forgave him. Near hysterical adulation follows the good-looking actor everywhere since his foray into TV and films. The Melbourne crowd was no exception as the audience clapped and whistled at every word he uttered. The Pakistani actor received a Diversity Award for his contribution in proving that art has no boundaries.
The audience was rather sparse at some of the Masterclasses despite some thought provoking content from accomplished speakers. Topics discussed were in line with the Festival’s theme of women’s empowerment. On the flip side, there was no dearth of spectators at the Rendezvous chat between actor Rishi Kapoor and his co-star Simi Garewal. Interest was also piqued with Richa Chadha’s candid conversation on body image and eating disorders and her personal experiences in showbiz.
No one was better placed to comment on censorship and pushing the boundaries with filmmaking than independent filmmaker Anurag Kashyap, who experienced major censor pressure on his recent film Udta Punjab. Famous for his bold and fearless aesthetics, Kashyap is regarded as the face of emerging new wave cinema in India and his session thrived on brainy debate. Kashyap also provided some well-measured responses as one of the guests during the Conversation Hour with Jon Faine on ABC Radio. He was accompanied by Fawad Khan and Richa Chadha in a chat session co- hosted by Festival Director Mitu Bhowmick Lange.

Towards the end of what could only be termed as a Herculean effort on the part of the organisers Mind Blowing Films, the 11-day festival concluded with a visit from Festival Ambassador Vidya Balan.  She was present at the meet and greet prior to the Australian premiere screening of her debut Marathi language film Ekk Albela. Vidya also visited La Trobe University to launch the ‘Educate the Educator’ initiative, made possible in partnership between the University and IFFM. Selected students will participate in a study tour of India in order to learn how to assist children with special needs in India. “Train the Trainers is yet another example of how the Festival reaches far beyond stage and screen to make a real impact,” the versatile actress claimed.
Vidya, who has led the way in playing diverse and strong female characters on screen, was thrilled to receive the Westpac Women Empowerment Award presented to her in an intimate ceremony at Victorian Parliament. The closing night of the Festival saw another quality film on the theme of the quest for gender equality followed by a Q&A with lead actress Tannishtha Chatterjee. Pan Nalin’s Angry Indian Goddesses, classified by some as the better Indian version of Sex and the City, was a refreshing celebration of friendship and girl power.
Bengali film actress Rituparna Sengupta, Marathi actress Radhika Apte, filmmaker/screenwriter Srijit Mukherjee and Punjabi singer Amrinder Gill attracted decent crowds at pre screening events as part of the Festivals diverse offerings. Filmmaker Gurmeet Sran, with his film The Hidden Truth, and musician Girish Makwana, with his debut film Colour of Darkness, provided the local contributions to a predominantly international movie line-up. Too soon it was a wrap and the last time for Festival goers to soak up the fun and style of an event that proved to be a fabulous winter warmer.