Gandhi: Love him or hate him? 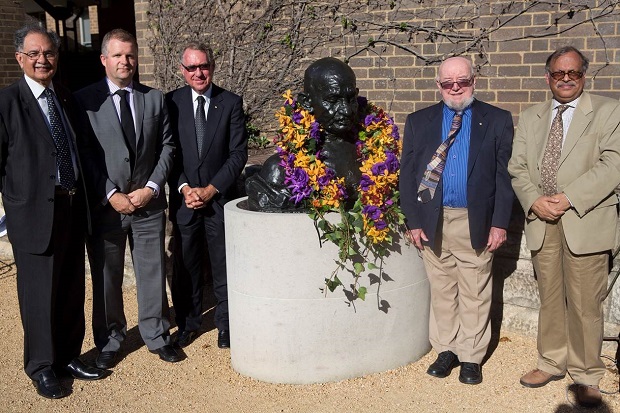 The third annual Gandhi Oration was delivered by internationally acclaimed Australian novelist, playwright and Republican Thomas Keneally AO, to a packed auditorium at the University of New South Wales on January 30, 2014.

It is fair to say that Keneally’s life’s work exemplifies the ideals of Gandhi. Best known for writing Schindler’s Ark, the Booker Prize-winning novel of 1982 that was later adapted into the movie titled Schindler’s List, which won the Academy Award for Best Picture, Australia’s living treasure Thomas Keneally needs little introduction. One of the founding members of the Australian Republican Movement established in 1991, Keneally has also published a book titled Our Republic (1993). It was therefore fitting that Keneally was approached by the Australia India Institute (AII), to deliver the Gandhi Oration, commemorating Martyr’s Day at UNSW.

Keneally presented his speech titled ‘Gandhi-Lovers and Haters,’ skillfully transporting the audience to times gone by. A master storyteller, he enthralled his listeners, evoking a gamut of mixed emotions covering laughter, sadness and pensiveness, among others. It was definitely a challenge to portray the man, the Mahatma and our beloved Bapu, through the lens of those who were inspired by and loved him; and others who so passionately hated him, none more so than Winston Churchill.

The keynote speaker quoted Churchill’s infamous comments when Gandhi was invited by Britain for peace talks. Churchill commented, “It is alarming and also nauseating to see Mr. Gandhi, a seditious middle temple lawyer, now posing as a fakir of a type well known in the east, striding half-naked up the steps of the viceregal palace, while he is still organising and conducting a defiant campaign of civil disobedience, to parley on equal terms with the representative of the king-emperor”.

Keneally touched on the influence Gandhi had on world leaders like Martin Luther King Jr and Nelson Mandela. At the time when the world was at war, Gandhi wrote a letter to Hitler sharing insights on the plight of the afflicted men, women and children, and the peace they sought. Keneally reflected on what could have been avoided if Hitler had only chosen to heed Gandhi’s words.

Keneally also recalled his conversation about Gandhi with a young student in India. This particular student had described Gandhi as a “silly man” for pitting the simple spinning wheel as the symbol of resistance against the mighty British. But Keneally succeeded in highlighting the morality issue that Gandhi was confronted with, when locally sourced cotton was exported to Britain to be spun into fabric and the finished garments sold to Indians at exorbitant prices.

The moral responsibility of a governing authority to its people could not have been more pronounced than in the example Keneally offered of the lesser-known Bengal famine of 1943 that took the lives of 3 million starving men, women and children.

Famines were not uncommon in India because of alternating droughts and monsoons; however the man-made ‘holocaust’ as described by Gideon Polya, an Australian biochemist, shed light on the evil that man is capable of inflicting on his fellow human beings. It’s true that the damage to the rice crop was caused by a local tidal wave resulting in an epidemic fungal disease, but what followed was the British purchasing massive amounts of rice from neighboring Burma, then occupied by Japanese forces, and hoarding it for diversion to British troops overseas and for use after war.

The ineffective government controls on hoarding and profiteering led to prices that were impossible for millions to afford.  Keneally did not fail to remark on the opportunity for an interested student to delve into research related to this and the Irish famine of the 1840s.

Keneally also brought up the story of Gandhi’s relationship with Hermann Kallenbach, a German Jewish body-builder, and the controversial book that chronicles this relationship, banned in some parts of India. The case was discussed at length at last year’s Gandhi Oration delivered by Justice Michael Kirby, and while it may have been amusing to Australian members of the audience, the Indian-origin listeners were not impressed.

Gandhi’s famous Dandi March was another attempt in passive resistance to become self sufficient in the manufacture of salt. In describing the satyagrahi’s methods to raise awareness of the oppression endured by the masses and inspire them to protest peacefully by non-cooperation, Keneally raised the topic of international airports in India being named after leaders like Subash Chandra Bose (Kolkata) and Sardar Vallabhbhai Patel in Gandhi’s home state of Gujarat. What perhaps Keneally might be forgiven for, is that as an Australian, he might not be aware that almost every city and town in India would have at least one of its roads named after Gandhi, as these roads run throughout the country like nerves in a body.

During the vote of thanks, Rohit Kapoor representing Tata Consultancy Services, sponsors of the event, addressed the gathering by narrating Gandhi’s relevance in the corporate world. He reiterated Gandhi’s message that ‘one needs to be the change one wants to see in the world’. The ‘Keepers of the Flame’ as they are known in India, the Tatas, have a lengthy history of moral servitude; the book For the Love of India by Rusi Lala chronicles their role in India’s pre and post colonial development.

It wasn’t surprising that Keneally’s speech managed to split the audience into ‘Lovers and Haters,’ achieving just what the title of his presentation proclaimed – to the extent that Kapoor who had so ardently been taking notes to defend Gandhi, forgot to thank Keneally! He concluded his mini speech by thanking the audience and left the stage to Neville Roach AO, Patron of the AII, to thank Keneally for his mesmerising and thought-provoking oration.

Roach also remarked on the great responsibility Keneally has left them to find a speaker who would do justice to the oration for the following year.

The discussions that Keneally managed to spark in the audience as they left the auditorium, bears testament to the difficult task ahead for the AII.