Game on for Gurinder! 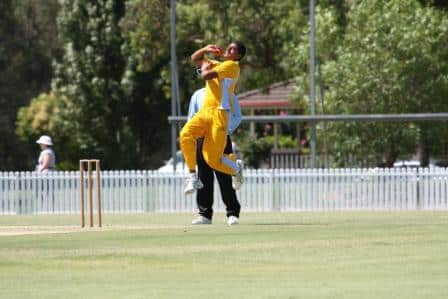 Just four years ago, Virat Kohli successfully captained an Indian side to the 2008 U/19 World Cup title. He is now one of the pre-eminent batsmen of the modern game. The same edition of the tournament featured big names such as James Pattinson, Tim Southee, Wayne Parnell, Darren Bravo – the list is scattered with future international superstars. The importance of the tournament is underlined by these names as the stepping stones the competition provides – for instance Kohli is now India’s one-day international vice-captain, and is already being touted as the future captain.

How it must feel then, for Gurinder Sandhu, a young Australian fast bowler who was, earlier this month, selected in the 30-man squad for the U/19 World Cup taking place in August.

The tournament will be held in Townsville, Brisbane and the Sunshine Coast , with more than 400 cricketers from 14 nations making the trip to the sunshine state. Australia are the reigning champions, after the Mitchell Marsh-led side won the 2010 trophy in New Zealand . An international quadrangular series will also be held in April between Australia , India , New Zealand and England , giving the players another opportunity to gain exposure and experience playing on an international stage. Gurinder was also selected in the 15-man squad for this series.

Cricket Australia ’s Talent Manager, Greg Chappell, is looking forward to watching the side in action.  “I’m sure all the players are looking forward to continuing their development as part of this preliminary squad,” he said. “Quite a few players already have experience playing at the U19 international level, and more players will get that opportunity over the coming months”.

“Players such as Pat Cummins, Cameron Bancroft, Kurtis Patterson, Travis Head and Meyrick Buchanan have already had opportunities playing at the domestic level, while quite a few more have also played at Futures League level this season,” added Mr Chappell.

Currently a member of Fairfield-Liverpool’s first grade squad, Gurinder has already bowled to some big names: Simon Katich, Usman Khawaja, David Warner and Phil Hughes have all faced up to him, among a host of other names, including the touring 2009 Pakistan side.  This is just one of the fruits of a tough training regime, which includes 2-4 days of training a week followed by matches on the weekends.

For Gurinder though, the journey began several years ago through his experiences in the junior representative teams.

“I first played in the 1999 cricket season in the local under-10s side,” recalls Gurinder. “My favourite memory as a child would be when I played in under 11s rep side for Blacktown and I took 5 for 28 off 10 overs”.

“I was always in the rep sides as a youngster, but did not think too much about it until I started to make the program called Emerging Blues, which is playing for New South Wales at an under 13, 14, 15, 16, 17 and now under 19s level.”

Reflecting on Kohli’s achievements, Gurinder is careful to jump the gun. “I would love to emulate his feats like most cricketers would, but I don’t think I will be captain of the Australia under 19s side! Personally I don’t think it’s too hard to get too cocky and start to think that you’re the best, and get a big head. Some people are good at sport, some are smart and make careers out of doing something educationally – not that I won’t at a later stage!” he says with a grin.

Although Gurinder has grown up playing at such a competitive level, the World Cup brings with it an altogether different sense of accomplishment – as it should.  A home tournament is an exciting prospect for his friends and family, who will no doubt be supporting him – although Gurinder knows he would have enjoyed the experience of an overseas event. “I am looking forward to the competition, as it will be my first time representing the country on such a big stage and also getting together and playing with the rest of the boys,” he says. “I think it would have been more fun touring another country but it’s also good that it is held in Australia because everyone in the team will be used to the playing conditions.”

His idol is no real surprise, given Gurinder’s aspiration to become a more rounded player. “Growing up, Andrew Flintoff would be up there as one of my favourites: he was a big, strong, tall fast bowler who also batted very well – I am trying to become more of an all-rounder now as well”.

As with many elite sportsmen, Gurinder’s immense skill has not come without its sacrifices – because of the time that cricket takes up, for now Gurinder doesn’t have the time to go to university. However, that might well be a blessing in disguise, for this young man is more than motivated to make something out of the game. “I’m just going to give cricket my all for now and see if I can get somewhere higher. I decided to join TAFE this year because they are more lenient on getting time off but I don’t think I will be able to complete TAFE anymore as these Australian games have come up,” he admits.

For now though, the only way for this talented cricketer is up. Gurinder loves his Rugby League and likes to spend his spare time having a laugh with mates, listening to music and relaxing. There won’t be much time for relaxing next month though, when he takes on the rest of the world – good luck!