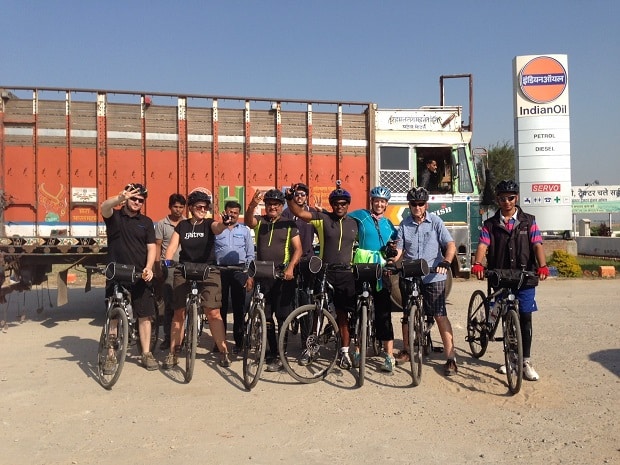 Reading Time: 3 minutesThe Yatra Foundation’s event was one of camaraderie and provided a unique rural experience for its riders

A recently held cycle tour offered Yatra’s founders and supporters a unique opportunity to visit India and raise funds to support its projects.

“The inaugural Yatra Cycle Tour of India was an amazing event and a great success,” said Yatra co-founder Sanjay Jain to Indian Link. “Six intrepid riders suited up for the adventure, with ages ranging from 35 to our oldest rider at 73 years young!”

The tour began in the relatively quiet surrounds of a bird sanctuary in Bharatpur, where the team had the opportunity to get use to their bikes and dusty pathways that would occasionally crop up during the trip. The riders had great support from the Art of Bicycle bike company that provided two riders and a support vehicle for breakdowns, both mechanical and human. Renu Binaykia was also present to provide the riders with support, local translation with cultural insights and photo opportunities.

“The ride was more about camaraderie and the experience, rather than kilometres covered, but we rode an average of 40km each day through beautiful rural Rajasthan, over 7 days in total”, recalled Jain. “It is hard to describe what it is like riding into a bustling Indian village in the middle of Rajasthan with cows, trucks, pigs, and people all jostling for the same expanse of the road, and motorbike riders trying to engage you in conversation. It certainly did focus our minds and left us all with memories for life!” he added.

The group rode to Faria School, one of their own, where they were enthusiastically joined by the students and teachers, swelling the pulton (group) to over 40. At the school, in addition to seeing the difference that Yatra is making to the education of poor children, from a firsthand point of view, the team was also able to play a game of soccer with the undefeated locals, who remained undefeated!

The tour ended with an unforgettable and challenging hill climb in Jaipur (after riding through the busy market district), that lead to an old fort overlooking the city, finishing with a steep, cobble-lined descent down to breakfast.

“Overall the group raised AUD$30,000 that will go towards the building of eight permanent classrooms at the Faria School, and proper toilet facilities”, stated Jain.

“The first Yatra bike tour of India was a crazy, unforgettable, noisy, wonderful, and uplifting experience for all involved, and we plan on making this a yearly event”, he added.

In a vast, diverse and populous country like India, despite rapid development in the urban sector, masses of rural poor still face social, economical and environmental challenges. Despite ongoing efforts and intervention by intrepid people, India is a long way from achieving its goal of providing education for all children.

Yatra Foundation seeks to effect an enduring change in the lives of Indian children and their families by giving them the opportunity to access primary school education, with the hope that a good education will lead them to better opportunities.

Yatra has several projects underway in partnerships with non-government and not-for-profit organisations within India. Yatra currently funds a small school in a slum (basti) in Kota, Rajasthan and helps run the Faria School in Sawai Madhopur, Rajasthan. The organisation is also funding 10 community-based centres in remote regions in Rajasthan that lack proper schools and currently supports over 150 children attending the Isha Vidya School in Cuddalore, Tamil Nadu. Through the Santosh Computer School in the village of Mandana in Rajasthan, Yatra provides essential computer skills to high school and University age children and young adults.

100% of the funds raised by Yatra Foundation are used to fund their projects. Their annual fundraisers are always popular and their ongoing efforts laudable. This year, Yatra is also involved in the 2014 Moonee Valley Colour Fest Run to be held on March 16. This year’s event will raise awareness and funds in partnership with two charitable organisations, the Rotary Club of Essendon North and Yatra Foundation.