From Bengaluru to Brisbane 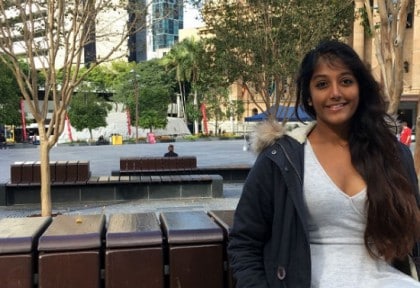 Harshitha Srinivas on what she has learned as International Student Ambassador

When Harshitha (Ash) Srinivas finished her address at Lord Mayor Graham Quirk’s ‘City of Welcome’ event, John Aitken, the CEO of Brisbane Marketing, whispered something in her ear.

“BTW, we are up one in the cricket.”
Ash whispered back, “Australia hasn’t won against India in India for a long time, so I’ll take my chances!”
It was at that moment she realised how far she had come, from being a shy international student to a confident and articulate leader.
Ash was speaking at the Lord Mayor’s orientation event for thousands of international students who started university in Brisbane this year, in her role as 2016 Brisbane International Student Ambassador.
She was one of 40 students picked last year for the position. The Brisbane International Student Ambassador Program adopts students from all over the world to tell their real-life Brisbane stories to their home country networks via social media. It was launched eight years ago to attract international students to Queensland.

“In my role through the year, I’ve spoken on social media as an Indian student in Brisbane,” Ash tells Indian Link. “I’ve helped out at friendship ceremonies and have reached out to new students, helping solve their problems. This has involved networking with providers at various levels like tertiary education providers and accommodation providers. I’ve also attended events as a representative of my country – we are after all the largest revenue makers as students.”
A Bachelor of Business (Human Resource Management) student at QUT, Ash reveals that not only has the role allowed her to fit well in her new environs, her leadership skills have taken a boost as well.
“The opportunities I’ve had have been truly amazing. A stint with Multicultural Queensland as an intern, landed me a multicultural consulting role with AFL!”
As a sporty type herself, Ash was immediately drawn to this Aussie sport, and is thrilled to see this convert to a work opportunity.

The Bengaluru girl reveals she felt out-of-sorts when she first arrived in Brisbane. “I was thrust out of my comfort zone, and I had to constantly remind myself of why I was here,” she recalls. “But I soon realised I love Brisbane and its people, who are open, friendly and so welcoming. One in four people here are born overseas or have a parent that was born overseas.”
She had visited Brisbane before with her mum, along with other cities in the country.
“I love Melbourne for its food and the arts, and Sydney is like New York for me! But I love Brisbane also for its nature, nightlife, arts and adventure. I especially love the drive to Mount Cootha and have so often been overwhelmed by the view of the city, especially with the lights at night.”
She was in her hometown Bengaluru recently and visited her school, where many of the students are looking to find overseas destinations for further studies.
“There’s a concern that the political climate in some countries may not be so favourable. I began telling them about Australia in general and Brisbane in particular, and they’ve asked me to return and talk to them formally about education opportunities in Australia. I’m going to tell them that Australia sees us not only as revenue raisers but appreciates us and are willing and ready to help us.”
To students who are keen on Australia, Ash says, “Let go of your fears. And when you do get here, grab every opportunity that comes by. You’ll regret the things you said no to! Just apply, and see where it all takes you.”

Does she miss home?
“A lot!’ she concedes. “Homesickness never really goes away, but it gets easier to deal with it. I participate in the activities of the Indian society at my uni, and outside in the community when I can. At Diwali last year I had a small celebration with my Aussie boyfriend and his family. They were so welcoming and appreciative. I joined them for their Christmas celebration.”