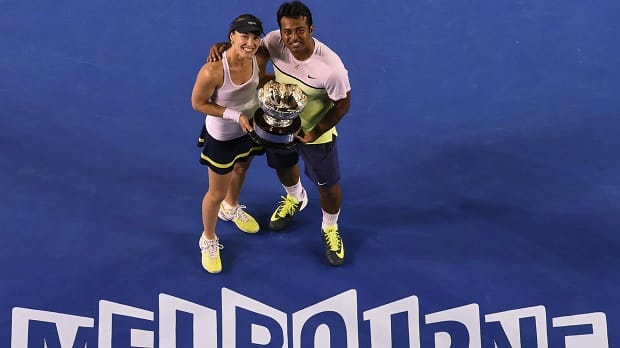 India’s Leander Paes, with his partner Switzerland’s Martina Hingis, won the Australian Open mixed doubles crown in Melbourne on Sunday 1 February defeating the French-Canadian pair of Kristina Mladenovic and Daniel Nestor.
Paes and Hingis, seeded seventh, beat the third seeds 6-4, 6-3 in one hour and two minutes.
India’s 41-year-old veteran tennis star with this win takes home his 15th Grand Slam title, his fourth in Australia (doubles 2012 with Radek Stepanek, mixed doubles 2003 with Martina Navratilova and 2010 with Cara Black).
Paes and Hingis were in control throughout and took just 29 minutes to take the first set 6-4.
The third seeds came back strongly and broke the Indo-Swiss pair early to take a 2-1 lead in second set.
However, it was all downhill from there for Mladenovic and Nestor as Paes and Hingis broke their serves twice in a row to establish a 4-2 lead.
The French-Canadian team did manage to win another game but it proved to be a mere consolation as Paes and Hingis finished the set 6-3 in 33 minutes to take home their first Grand Slam title of the year.
This was Paes’ seventh mixed doubles Grand Slam title – his first with Hingis, a former World No.1 in women’s singles.
Paes also has eight men’s doubles titles in his glittering career.
“It’s a great honour to keep coming back to Australia,” said Paes. “It’s a treat to play with Martina. I finally managed to learn some things from her returns and returned half decently today.”
Hingis, 34, (who came out of retirement for the second time a couple of years back), won her first Grand Slam title since 2006. Incidentally, that was also a mixed doubles title with another Indian, Mahesh Bhupathi. This was her tenth doubles Slam apart from her five singles titles.
Hingis thanked her idol and legend Martina Navratilova for suggesting Paes as her mixed-doubles partner.
“I am thankful to Martina (Navratilova) for getting me to partner with Paes,”she said after the game. “It’s incredible to be playing on the surface that I made my debut in 1995. I never imagined that 20 years down-the-line I would be still be playing here.”
Navratilovia, who also partnered Paes to clinch the Australian Open and Wimbledon mixed-doubles crown in 2003, was in the stands to watch the tennis veterans play.
For Indian fans, the chance of seeing an all-India doubles final in the Australian Open was lost after Sania Mirza and her Brazilian partner Bruno Soares bowed out in the semis.
Sania tweeted afterwards, “Sometimes even ur best is not enough when luck is not on ur side; we’ll be back – stronger and better cya next yr Australia.”
IANS and other sources