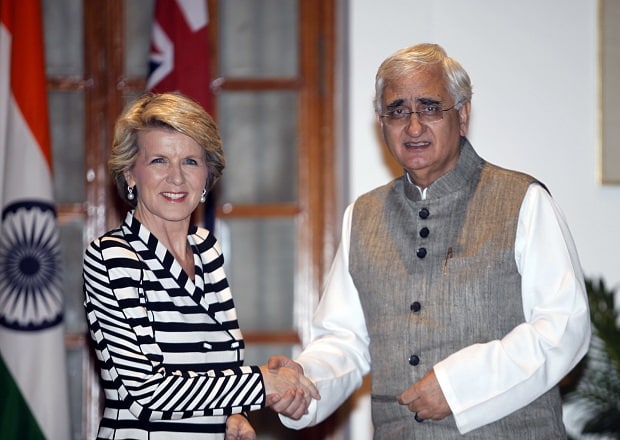 Australia and India are to hold the third round of their civil nuclear cooperation talks Nov 26-27 to pave the way for an early conclusion of the agreement, visiting Australian Foreign Minister Julie Bishop said in New Delhi on Nov 18 after talks with India’s External Affairs Minister Salman Khurshid.
Australia will also support India’s membership of the Nuclear Suppliers Group (NSG), Bishop said during a joint press conference. The two sides inked two agreements, including a statement of intent between the Australian government and India’s Nalanda University.

Bishop said both sides hoped to conclude the civil nuclear cooperation negotiations that would pave the way for the sale of Australian uranium to India. She said both sides are negotiating in “good faith” and added that the Tony Abbott government is in favour of selling uranium to India. Australia and India are also planning to begin negotiations on a free trade agreement, she said.
Khurshid said both sides were looking to schedule a visit early next year of new Australian Prime Minister Tony Abbott to India. “We are looking at an early slot for him to come down next year,” he said.

The visit was being planned amid indications that Abbott “wants to begin his term with a fruitful visit to India,” he said. Australia and India are also increasing air connectivity with Air India deciding to start direct flights to Sydney and Melbourne and Air Australia planning to launch direct flights to India, said Khurshid. The external affairs minister said Indian business had an “impressive footprint” on Australian soil and hoped that a larger number of Indian companies will invest in Australia. An Indian-Australian CEOs’ forum is to meet soon, he said.
Bishop said she wanted to visit India early in her tenure “to show the significance we attach to ties with India”.
She said the “ambitious” free trade agreement (FTA) they planned to negotiate would be mutually beneficial. As part of their deepening engagement in security cooperation, the navies of the two countries are to hold joint exercises. Both sides also discussed cooperation in counter-terrorism and cyber security.

In the field of energy security, Bishop said India could count on Australia for its “trusted and reliable support” for its needs, including coal, LNG and civil nuclear energy cooperation. Bishop said there were “no specific time lines” in concluding the civil nuclear agreement with India and both were “waiting to get it right”.
Energy-starved India aims to upgrade its nuclear power generation capacity to 20,000 megawatts (MW) by 2020. Australia has one of the largest known uranium reserves in the world.
Australia, a key member of the Nuclear Suppliers Group, had earlier been opposed to selling uranium to India as New Delhi has not signed the Nuclear Non-Proliferation Treaty (NPT). It reversed its policy in 2011. Bishop also said her country welcomes Indians coming to Australia to pursue higher education. As part of wooing bright Indian minds to that country, the Abbott government has proposed a new programme under which students can pursue internship with a business company, she said.