Flying in from overseas 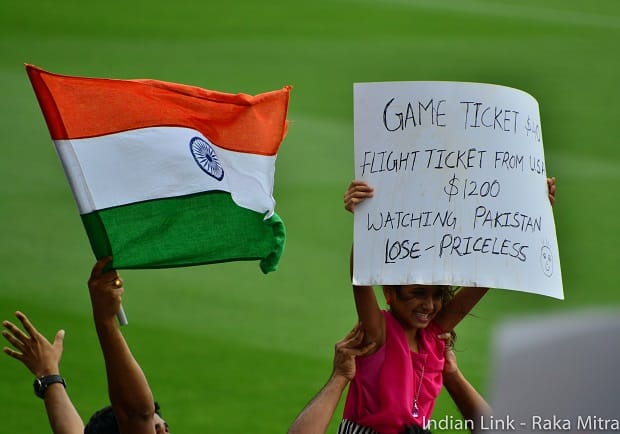 On Sunday 15 February, all roads in the otherwise quiet and laid back city of Adelaide led to just one place – the Adelaide Oval cricket ground.

Indeed, the beautiful city of Sir Donald Bradman had never seen anything like this before as thousands of India and Pakistan fans came in from every nook and corner of the world to be part of the showcase event of the 2015 ICC World Cup.

The fun began as early as three hours before the game as supporters of both teams began arriving in groups to the stadium. Of course, those wearing the colour blue easily outnumbered those wearing green by a ratio of around 90 to 10, but the camaraderie shown by them all was admirable.

In keeping with the spirit, an Indian and a Pakistan fan played DJ in the open space adjoining the stadium as hundreds of supporters danced to some of the hit numbers. While fans danced to numbers like ‘Chak de India’ and ‘Jai Ho’, the ladies took turns to put on the national colours on their cheeks.

Mohammad Bashir (pictured), a Chicago based Pakistan fan, made his presence felt posing with a replica of the World Cup trophy. Bashir, whose wife hails from the Indian city of Hyderabad, has the highest regard for the Indian captain Mahendra Singh Dhoni who gave him a ticket for the ICC Champions Trophy final in England two years ago after Pakistan had made an early exit from the tournament.

India’s most photographed cricket fan, Sudhir Chaudhury (with Sachin Tendulkar painted on his chest) was on hand to wave the tricolour and blow a conch shell in welcome. Soon enough, he was joined by Lahore’s Pakistan-flag waving Bilal and his son. It was a sight to behold as the flags of the two nations painted rich colours in the stands.

Kaashif, his brother and his ageing father, had flown in from Karachi via Sydney as much to watch MS Dhoni and Virat Kohli as Shahid Afridi and Ahmed Shehzad. Aanshul Gulati reached the Oval, jetlagged after a long haul from Seattle, and was posing for photographs with Kaashif and his family.

There was also a young couple, colleagues in a software firm in London, who spent Valentine’s Day watching the Indian team at training, who were also there to witness a rare India-Pakistan match.

Aanshul Gulati, who will stay on to watch a number of games and stay on in Australia until the final, said, “We Indian fans know how to celebrate in style before, during and after the game. However I have to hand it to the Pakistani fans for the grace with which they accepted their loss and even joined in the fun post-game. I hope that we do the same if ever the tables are turned.”

“My interaction with the Pakistani fans both before and after the game was memorable and I am happy I have some incredible memories to take away,” Gulati said.

A father and son of Pakistan origin, who now live in Glasgow, Scotland, had flown to Adelaide for a special reason. The son, who celebrated his birthday on Valentine’s Day, wanted nothing less than a Pakistan victory over India as his gift. While his father fulfilled part of the deal, he had no control over the turn of events on the ground. So the Ahmeds spend their entire time at the breakfast table on Monday morning discussing where exactly Pakistan went wrong in terms of strategy and execution.

Shabad Thadani, who came down from Hong Kong, was over the moon to witness an Indian victory. Like thousands of others, he too had a ball at the Ground. And like all the others, he left with memories to last a life time.

“The exit from the stadium was like a Punjabi wedding baaraat; dhols being played, men, women and children showing off their best bhangra moves. The quaint train station began to resemble Mumbai’s historic VT station, pouring out blue-clad fans by the hundreds as people made the short walk back to the city centre.”

“Traffic came to a grinding halt, with people waving tricolor flags in the middle of the road as if they were chequered flags at the Monaco Grand Prix,” he said.

In the late evening, as thousands of spectators assembled at Adelaide airport, the authorities were forced to throw out the rulebook for the night. In fact, they put up a huge screen and showed three Bollywood movies back to back.

A few clever people managed to get samosas from the town which they joyously distributed to all and sundry. With plenty of bean bags to lie down and relax, the airport turned into a makeshift hotel for fans.