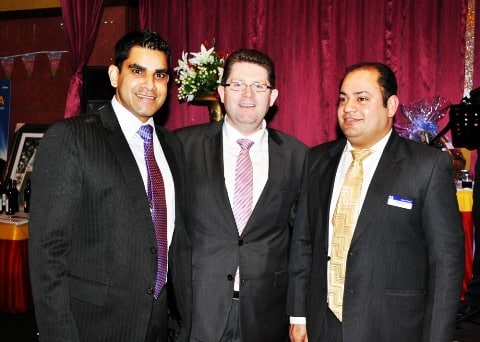 Reading Time: 2 minutesJag Chugha from the Liberal party is dedicated to giving back to the community

A campaign launch dinner was held recently at Café Saffron Restaurant in South Morang, for the Liberal Party campaign in Scullin. The Liberal Party candidate for Scullin is Jag Chugha, the first Australian of Indian heritage to stand for a federal seat. Jag is a practising lawyer in the corporate sector. He has lived in Thomastown most of his life and attended Thomastown Meadows Primary School and Merrilands Secondary College. Jag completed his Master of Laws (LLM) from University of Melbourne and a LLB / BCom (Accounting) from Bond University. He is married to Kiran, and has two young sons.
Jag wants to give back to the community by helping reduce cost of living pressures, supporting small business and improving local infrastructure, transport and education.
Scullin covers 169 sq kms generally north of the Metropolitan Ring Road on the northern fringe of the Melbourne metropolitan area. It includes the suburbs of Thomastown, Lalor, Epping, Mill Park, Plenty, Diamond Creek, Hurstbridge and parts of Greensborough. Scullin has been a Labor seat since it was created in 1969.The retiring Labor MP is Harry Jenkins Jnr, who has represented this seat since succeeding his father in1986. Harry Jenkins Jnr is now retiring, and the Labor candidate for Scullin will be Andrew Giles, also a lawyer. Single mother and small business owner Rose Ljubicic will contest against them as a Green’s candidate.
During the campaign launch event, Jag received encouragement from various Liberal party leaders, individuals, businesses and community organisations. Liberal’s Michael Kroger was the main speaker for the event. Other speakers on the night were Senator Scott Ryan; Vasan Srinivasan, President – FIAV; Chairperson for Scullin Vincent Rizza; Chairperson for Jaga Jaga, Jacky Douglass; and Anthony Fernandez for Ivanhoe. Liberal candidate for Calwell, Dr Ali Khan; former Liberal candidates for Peter Chugha (Mill Park); and Goldy Brar (Bundoora); Scott Pearce and Shamla Ozturk, Liberal Party Administrative Committee were amongst those present to offer the campaign and Jag their support.