Fireman Singh to the rescue 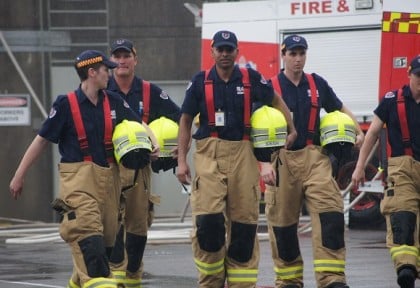 As more people from diverse backgrounds join the brigade, Gagan Singh hopes to give back to the community in his new role with Fire and Rescue NSW

What was so remarkable about Gagan Singh’s graduation?
“Even though there are no official records of firemen’s nationality, the staff here say, in their 30 years of experience, I am the first person of Indian background to join the service,” the 33-year-old Quakers Hill resident told Indian Link.
Gagan Singh came to Australia in 2004 as an international student from Punjab. After completing his studies in community welfare, he took up a position as a contact supervisor with a private company working closely with the Department of Community Services. Here, Singh was responsible for coordinating access visits between parents and children who were separated.
He moved on to work as a community services teacher for a local college and later worked in Villawood detention centre as a detainee service worker.
In 2013, Singh became an Australian citizen, and after having tried his hand at various jobs, he realised he needed something more meaningful to give him the personal and career satisfaction he craved. This is when he learned about the fire service and decided to apply.

“I came as a migrant and this country has given so much to me,” Singh said. “My main reason for joining was to give something back. I wanted to work in the emergency services where I could make a living and serve the community at the same time.”
The fire service is a very competitive field. Last year an estimated 8000 people applied for training and only 120 were selected, amongst them was Gagan Singh.
Following his initial online application, he had to go through a rigorous selection process. After clearing the psychometric, personality and safety tests he was invited for a physical test.
“This was quite demanding. We were tried in similar situations as actual fire fighters to determine our suitability for the job,” Singh explained.
“I wasn’t much into physical fitness, but when I made up my mind, in 2014, to join either the fire or the police service, I started training and it paid off.”
The intense 13-week course at the FRNSW State Training College has prepared Singh with the skills required for fire-fighting, road crash rescue, high angle rescue, community risk management, fire science and hazardous materials response.
“Contrary to popular belief, we weren’t only taught how to spray water on fires,” Singh said. “We were educated in physics, chemistry, hydraulics, communications and a whole lot of other subjects.”
The recruits learned how to drive the fire truck and respond to various types of emergency situations.

“The training was both physically and mentally demanding and the assessments were full on,” Singh said.

The biggest challenge he faced during training was his lack of mechanical knowledge.
“Most of the other guys were from trade backgrounds and I even struggled with the names of basic tools,” chuckled Singh, adding as an after-thought, “I knew the names in Punjabi!”
The initial training gave the recruits a basic understanding of safety procedures and skills to get them started, Singh explained. The real training will be an ongoing process of learning on the job. After two years he will need to undertake mandatory training to become a fully qualified fire fighter.

Now that he’s graduated, Singh has been posted at the Huntingwood Fire Station and just recently finished his first day at work, which he labelled “a most exciting experience”.
“I attended my first rescue call,” he revealed. “My heart was beating at 200 beats per minute. The feeling is hard to describe and I think it will be at least a year before I will be able to calm down enough!”
But, what do fire fighters do day-to-day when there’s no rescue or emergency?
Singh was quick to point out that NSW fire fighters respond to an emergency every four minutes. In addition to that, fire fighters impart a lot of community education. They visit schools, prepare pre-incident plans for new factories, conduct fire drills and visit old age homes.
The fire service is trying to attract people from diverse backgrounds to join the brigade, and for other Indian migrants considering joining the fire service Singh has this message: “This is a great country where we should all contribute to the community. Being from a different background may make you hesitant, but once you join you will realise how good everyone is. So get fit and apply, it is a great organisation.”