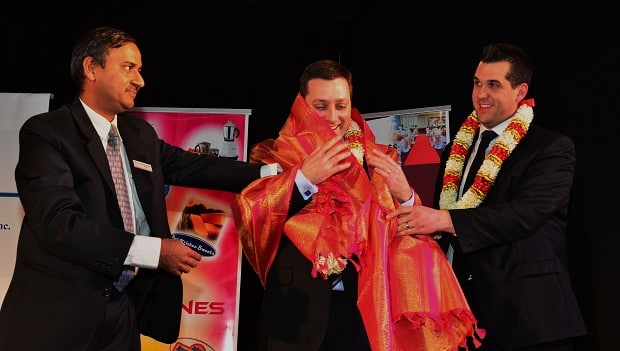 
An uncharacteristically warm day greeted invited dignitaries and members alike at the Preston City Hall, to celebrate the silver anniversary of Federation of Indian Associations Victoria (FIAV). Dr Santosh Kumar, President, Northern Region Indian Seniors Association (NRISA) and co-ordinator for the day, greeted as many members as he could. Melbourne radio hostess Mrs Vijaylakshmi took to the stage to welcome members, and invited Barbara Nagaya as MC, to commence the program by singing praises to Gods of all faiths. Barbara sang a selection of Sanskrit shlokas in her rich voice and disciplined style, as only she can, following up with an apt Bollywood number, ‘Ajeeb dastaan hai yeh, kahan shuru – kahan khatam’, from Dil Apna Aur Preet Paraee.
Next came a troupe of young dancers from the Shiamak School of Dance and Music, who performed an ultra-fast and well-rehearsed dance of the 21st century. They acted out a rather ominous battle show with traditional kirpans to pre-recorded music. Next, Dr Santosh Kumar, on behalf of FIAV welcomed Mr Rakesh Kawra from the Indian Consulate General, Mr Chitambaran Srinivasan, Victorian Multicultural Commission Commissioner, and Presidents and members from Malayali, Goan, Gujarati, Kashmiri, Marathi, Kingston Indian Senior Citizens Association (KISCA), and Indian Seniors Forum (ISF), among others. He regretted that many other associations invited did not even acknowledge the invitation. He reiterated that that partnerships survive on the principal of ‘give and take’, or they just wither away. He praised FIAV President Vasan Srinivasan’s perseverance in promoting the community’s cause with the government to receive grants and concessions. Mr Matta, an elegant senior, placed a shawl around Mr Vasan’s shoulders in the acknowledgement of his relentless services to the community. Santosh recommended that the community must recognise the need for an umbrella organisation such as FIAV, which caters to their ever-increasing needs.
Santosh praised the contributions of various members to the community and Australia. He cited that Mrs Krishna Arora and Mrs Usha Sharma were the only two of Indian origin whose names appear on the Schillings Wall of Fame. He praised Mr Surinder Verma, a journalist who has written many books that have been translated into other languages.

Charming Ms Sunita Sethi took the stage to perform two well-picked songs impeccably, followed by Mr Sushil Sharma of NRISA, who also sang two songs in his rich voice.
Commissioner Srini was all praise and encouragement for the efforts made by various associations to entertain and rejuvenate our seniors. “Melbourne is the most multicultural city in the world, which portrays a beautiful mosaic of cultural harmony in diversity. To promote cultural activities, an affiliation with FIAV is paramount, which acts as a bridge between the community and the government,” stated Srini. As per an ABS 2011 report, one-third of Australia’s population are over sixty. Most recent Indian immigrants are not English language literate, and the VMC spends $1.7 million among 700 associations to educate and entertain them. There are many Indian recipients of Order of Australia and the Medal of the Order of Australia whose services to society have been recognised, he stated, naming a few. Very thoughtfully, Monica Dowling from ‘Donate Life’ was invited to enlighten attendees on the benefits to society of donating organs. “One donor,” said Ms Dowling, “helps in saving pain to the lives of at least ten people.”
FIAV President Mr Vasan Srinivasan praised the government of Victoria for giving the community a hall and an office in centrally located Little India in Dandenong, for community related activities. Hindu Society has created a cultural section to accommodate 700, and also a museum of India. With pride Vasan stated that FIAV has been instrumental in bringing together 26 dance and music outlets under one umbrella called the Federation of Indian Music and Dance Cooperation (FIMDC), and also the Multi Faith Organisation (MFO). He stressed the need for coming together so we may strive to serve you even better. FIAV has finally created an Indo-Australia Trust Fund in association with Australian Unity and various banks, toward opening a 90-bed home for Indian seniors with a number of apartments, at Mt. Martha in beautiful Mornington Peninsula. Vasan also stated with pride that website information pages on the FIAV run into over twenty! Not taking anything away from previous FIAV Presidents, Vasan’s Presidency is already reaping rich dividends for the community.

The services of various members of the community were acknowledged through presentations. Dr Naunihal Singh was awarded a plaque by Mr Rakesh Kawra, and was presented with a pin – a replica of the Indian Ashok Chakra with Australian kangaroo and emu visuals, on his jacket. A Professor of Maths at Monash University for 30 years, Dr Singh was Vice President of Hindi Niketan and continues promoting India and the Hindi language. Mr Hitler David, of the Malayali Association was the first India-born engineer in the tools and dye industry. He is President of World Malayali Association and actively promotes the Malayali cause and culture in Australia. Mr KLS Bhagat was felicitated next, of an Indian army background, he has been teaching yoga for years. Mr Arjan Tuli, apart from his duties as first President of Indian Seniors Association – West (ISAW), is also involved in running an orphanage at Pondicherry. The last to receive his plaque, surprise-surprise, was yours truly, from Indian Link, for covering the Melbourne cultural scene. Mr Gandhi Berinakoppa, ex-Vice President, FIAV, and Mr Thiruvallam Bhasi, Editor, Malayalee News were also invited to the stage. The ‘youngest member of the community’ Sardar Bharpur Singh Mokal was invited to the stage by Vasan. This living legend will celebrate his 98th birthday on October 6. Sardar Harbhajan Singh Aulak, 81, created a stir as he recounted in Punjabi, his athletic achievements in India and Australia. The lunch from Tandoori Junction was delicious and brought an end to a well-presented and well-managed program. The 250 guests seemed more than satisfied with the event which took Dr Santosh Kumar and Mr Vasan months to organise. A great day to celebrate a great milestone.
- Advertisement -
Share
WhatsApp
Facebook
Twitter
Linkedin
Previous articleSelf-belief to succeed
Next articleChand Raat's dazzling Melbourne debut