Festival of Dangerous Ideas: Humanity versus the GDP 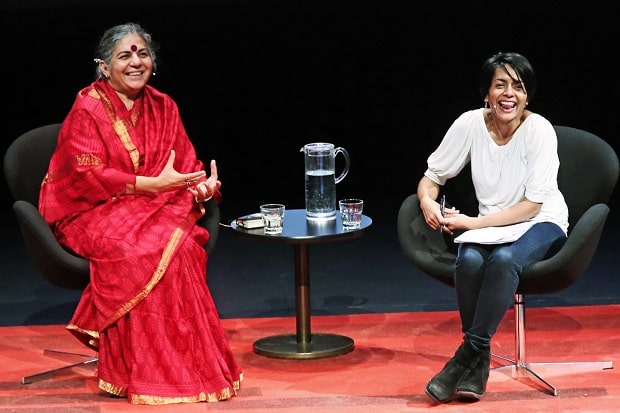 
Three years ago, on November 3, 2010, Vandana Shiva won the hearts of many a Sydneysider with her fiery oration at the Sydney Peace Prize lecture at the Sydney Opera House. On exactly the same day this year, she was back at the Opera House presenting her lecture at the Festival of Dangerous Ideas on Growth = Poverty. The fire still smouldering within her, Vandana enthralled an almost full to capacity audience with her views on why the present measure of the world economy, the Gross Domestic Product (GDP), is a “rogue concept creating rogue economies the world over”. Vandana also spoke to the Indian Link the day before the lecture about globalisation, seed banks and her views on patriarchy and culturally perceived poverty.

Opposing patriarchy
Being one of the leading eco-feminists, Vandana’s views on the effects of the patriarchal society we live in has often offended numerous men. However, she offers no apologies for these views. “We need to be more aware of structures of patriarchy today as they have taken more virulent forms,” says Vandana. “Traditional patriarchy based on structures of religion and caste have now joined forces with capitalist patriarchy based on the rape of the earth. This is increasing the violence against women”. No one can deny the truth of her fundamental arguments, in spite of her inflammatory remarks and fierce rhetoric. She clarifies that it is the patriarchy she is against, not the male sex.
“If we want to use pleasant words, but our women get raped every day, that is a choice we make. For me to speak the truth is the very basis of my existence and my conscience,” stated Vandana.
She has witnessed first-hand the relationship between women and ecology way back with the Chipko movement in the 1970s, when women formed human circles around trees to prevent their felling. As an eco-feminist, Vandana suggests that a more sustainable and productive approach to agriculture can be achieved through reinstating a system of farming that engages women, works with nature, respects ecological limits to growth, understands the inter-connectedness of all living things, and celebrates bio-diversity. Patriarchy as a masculine mode of thinking has a mechanistic view of the world. It has created huge corporations that are trying to transform the world into a supermarket, where growth of an economy is measured by the narrow concept of GDP.

Grouse against GDP
“The first poverty is at the level of the mind, that humanity should have shrunk its mind so deeply and reduced the amazing plurality of options we have on how to produce and how to consume, to one number, the GDP,” she said in her lecture. Being a quantum physicist herself, Vandana says that she can appreciate the beauty of the abstract. Looking back to her school days, she reminisced that she never liked to speak at school assemblies, or write essays when five lines of equation would do. “I believe that the abstract as abstract is fine, but when it starts becoming the measure for the real world, that’s when the destructiveness comes in,” she explained.
“We are sacrificing our entire world for this flawed abstraction,” she said, giving an example of how the GDP does not measure the hydrological cycle of nature but takes into account what Coca Cola produces, though its processes use ground water extensively and leaves behind pollutants and heavy metals. In the act of eating and by making a choice in what we eat, we can make a difference. Vandana says that to this day she cannot bring herself to drink Coca Cola, referring to it as ‘the brown liquid’, after visiting Kerala where women were fighting to prevent the setting up of a Coca Cola plant. Another example of this flawed abstraction was that if you cook a wonderful meal at home, you do not contribute to the GDP, but if you consume a McDonald’s burger, you do.
“And then you contribute extra, to the obesity and all the things that come with the hamburger,” she said on a lighter vein.
Vandana quoted Robert Kennedy’s famous speech in 1968 about GDP, “It counts air pollution and cigarette advertising, and ambulances to clear our highways of carnage… It counts napalm and counts nuclear warheads and armoured cars for the police to fight the riots in our cities… Yet the Gross National Product does not allow for the health of our children, the quality of their education or the joy of their play. It does not include the beauty of our poetry or the strength of our marriages, the intelligence of our public debate or the integrity of our public officials… it measures everything in short, except that which makes life worthwhile”.

Cult of consumerism
It is often said that the Green Revolution saved India from famine, and though it is hard to deny that it did, it also gave  rise to monocultures, corporate control over seeds, the depletion of soil fertility and pollution of rivers from chemical run-off from the over-use of fertilisers and pesticides. That this also destroyed indigenous farming cultures and has since caused many suicides, is telling. The statistic of farmer suicides quoted by Vandana is 284,694 and that is only the ‘official’ figure, she points out, which is chilling. She asks everyone to take another look at the paradigm of growth. The cult of ‘growth,’ which has dictated policy for decades. Consumerism as a cult is the way the growth mechanism keeps growing. Amidst the serious talk, Vandana drew laughter from the audience when she pointed out that the word ‘consumption’ was the word for TB or tuberculosis in the Middle Ages. You died of it!

Seed solution
Her detractors call her the High Priestess of the ‘keep the poor poor and hungry’ movement. But Vandana believes in change at a grassroots level. Navdanya, literally Nine Seeds, is an organisation she started in 1987 to create a non-violent system of farming where one works with nature. It was created as an alternative to the idea of seed as patented intellectual property, and the imperative that industry had to push genetically modified seeds. So the organisation started creating sanctuaries for seed in the form of community seed banks. Vandana said that her colleagues are working on distributing seeds that are salt-tolerant in Orissa, which was ravaged by a cyclone recently.
“In fact, the seeds that we saved have helped each time in recovery after a climate disaster, whether it is drought, flood or cyclone” said Vandana.
She believes that every garden should be a seed sanctuary, using open pollinated seeds that can be renewed and saved, creating a different growth economy; a growth of plants, of diversity, of children, of health, and of our relationship with the earth. It is not the narrow growth of finances.
“If people don’t rise up and start questioning the power of giant corporations, we will see that what has happened to Indian farmers will happen to all levels of society the world over,” emphasised Vandana.
Globalisation as the phenomena of countries opening their markets is now over, she avers. What is now happening is agreements such as the Trans-Pacific partnership agreement, which in effect allows corporations to sue governments.
“This next step of coercive globalisation where corporations sue governments will mean the end of democracy, the end of human rights and the end of sustainability,” Vandana warns.

When asked who was the real Vandana in private, she replied that she could not do what she does as a 9 to 5 job. It is her very existence. She has rejected politics in spite of requests from close friends who will be contesting the Delhi elections with the new Aam Aadmi Party. “I made a choice not to be in politics but rather, be in deeper transformational processes,” she stated.
- Advertisement -
Share
WhatsApp
Facebook
Twitter
Linkedin
Previous articleForeign Minister Julie Bishop in India
Next articleCricket: Thank you for the memories!