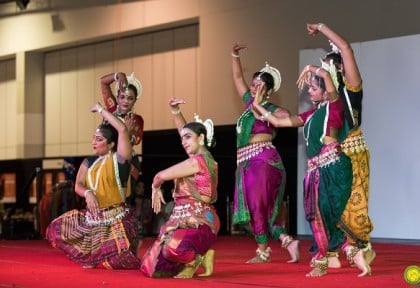 Organised every year by the Indian Australian Association of South Australia, Indian Mela 2017 was a glitzy, colourful affair with lots of music, dancing, food and stalls.

The annual event grows in attendance and community participation every year and shows popularity among all sections of the Indian community. Even though there are many highly entertaining community events by various organisations now on Adelaide’s Indian calendar, the mela is by far the most popular!

As with the past two melas, this year the event was organised indoors in the huge Jubilee Pavilion at Adelaide Showgrounds. A tastefully decorated entrance welcomed all and, even before they actually came inside, the little ones could go on pony rides outside and there were also nets set up by the South Australian Cricket Association for people to ‘come n try’ cricket. Sports and fitness definitely got a look in at this IAASA Indian Mela with there being a ‘try footy’ area as well as yoga demonstrations and fitness talks about traditional games like kabaddi.

The Show began at 11am with lamp lighting and prayers from all religions being read. The Chief Guest was Consul General B. Vanlalvawna. Other invited guests who attended the mela at various times throughout the day included the Governor General of South Australia Hieu Van Le.

The official segment was at 8pm with the Minister of Multicultural Affairs, Zoe Bettison, various ministers, Members of Parliament and several other dignitaries attending. The South Australian Government has promised another $90,000 funding over the next three years, so that the Mela can continue to showcase Indian culture to all South Australians.

And what a grand day it was with something for all the almost 7000 attendees. Food stalls and stalls selling clothes and jewellery added to the atmosphere. The Kids Korner had a jumping castle as well as art and craft activities, dance workshops, face-painting and henna. The kids absolutely loved it and the parents had a well-earned rest from running after their children.

The main stage had a good mixture of classical and Bollywood dancing and it was heartening to see more than an hour devoted to music. Some very good singing talent was represented. In spite of the stage lighting being not very satisfactory and the backing music for dances being too loud, the entertainment on stage was very enjoyable. More than 250 members of the community participated in the group dances and songs.

The last hour or so of the evening was a dance floor open to the crowd of hundreds dancing to the music of two DJs. A very enjoyable time was had by all!
And that is what the IAASA Indian Mela is about, the community coming together to put on a show, spending time with friends and having a wonderful time. Till next year!