Festival for all ages and stages 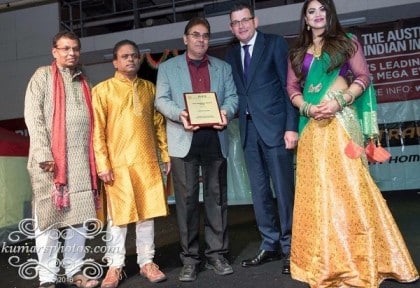 Celebrating the 15th year of the AIII Diwali festival

Traditions new, old and everything in between were celebrated at the My Light Carnival 2016, held at Sandown Racecourse recently. It was the 15th year of Diwali celebrations by the Australian Indian Innovations Inc. (AIII) making it one of the oldest multicultural Diwali events in Melbourne.

Fine weather greeted the thousands that attended the event throughout the day. Official figures are yet to be declared, however an estimated 8,000 plus people visited the event according to the organisers. People congregated for the popular celebrations from noon onwards, with crowds swelling further towards the evening.
It was a festival for all ages, at all stages, as the diversity of patronage was clearly evident. The non-alcoholic and family-friendly environment saw considerable attendance from families, with young kids keeping the various rides occupied. Stallholders pitched their wares of arts, craft and fashion, but it was the food vendors that attracted the highest response, as always. A wide range of Indian street food and delicacies, an eminent part of the Indian eating-out culture, drew a considerable crowd and profit.
Back to back cultural performances kept the crowds entertained as hundreds of artists displayed their talent on the undercover stage. Rashi Kapoor, who was chosen as the brand ambassador of AIII Diwali 2016, cut a beautiful figure in traditional Indian lehnga choli drawing attention as the MC for the formal event. This year the festival was more traditional and had more of a personal touch according to Rashi. “I really enjoyed my role as the Festival Ambassador,” she said.

Victoria’s Premier Daniel Andrews graced the event with his presence, along with several other dignitaries, local politicians and community representatives. According to Premier Andrews, Diwali has become a festival that is embraced by countless Victorians as an opportunity to experience the best of Indian culture and traditions. He wished everyone a happy and peaceful Diwali.
Other speakers also exchanged wishes for the joyous occasion of Diwali and reflections were made on its symbolic significance of hope over despair, light over darkness and knowledge over ignorance.

Rajesh Yadav was awarded the Young Achievers Awards 2016 and Charles Walker was awarded the community Service award 2016 for their contribution to AIII and the Indian community.
The much-awaited fireworks display was cancelled due to the possibility of bad weather, according to a member of the AIII Committee.
“With so many Diwali celebrations now being held around town, we are spoilt for choice, however I still like to come here every year as it is close to home and the organisers have made good improvements and additions over the years,” said Kanwal Singh, who claimed to have visited all the AIII Festivals since its inception in 2002.