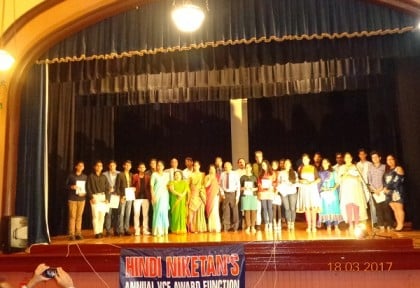 Students of Hindi from the VCE Class of 2016 reconvened this month for a special occasion. The local Hindi Niketan organisation had organised the event to recognise their efforts in studying their mother tongue.
The event also marked the appreciation of Hindi, one of the fastest growing languages in Australia. Members of all ages took to the stage to perform Hindi songs, poetry, skits and dance routines. The event showcased traditional and contemporary performances and it was remarkable to see the younger generations speaking Hindi with a high degree of proficiency.

The Hindi Niketan has been organising the event for the past 22 years.
Dr Rahul Gupta, President, commented, “It is great to see many students undertake VCE Hindi. They are all contributing to the promotion of this great language to the wider Victorian community for future Year 11 and 12 students.”
The graduates received a trophy and certificate of recognition for their efforts. Those who ranked first, second and third, according to their study score (out of 50), received a monetary prize too.
For those who might not know the history about the VCE Hindi subject, Hindi became an accredited VCE study in 1993. The Victorian Curriculum and Assessment Authority (VCAA), the department responsible for VCE testing, assessments and examination, worked in consultation with language experts and community leaders, including Dr Dinesh Srivastava of Hindi Niketan, to have Hindi added as a VCE language study.

The VCAA develops, monitors and reviews VCE language studies to ensure that the needs of Victoria’s culturally and linguistically diverse communities are supported. Monash Council Mayor Rebecca Patterson noted, “There are approximately 147 languages spoken at homes within the Monash jurisdiction. Encouraging the younger generations to learn a language ensures that they retain this vital understanding for future years and generations.”
Indian Link contacted the VCAA, to obtain current facts about the Hindi subject. The VCAA advised that the overall number of VCE students undertaking Hindi has remained relatively stable over the past 5 years. Since 2012, the enrolments have averaged between 34 and 41. Completion rates have also remained steady with students successfully completing the subject. Based on data for the preferred language studied, Hindi is currently ranked 21 out of the 46 languages offered. Chinese, French and Japanese rank 1st, 2nd and 3rd respectively.
All students that had undertaken the VCE Hindi subject attended centres run by The Victorian School of Languages (VSL). VSL provides language programs for students in Years 1 to 12 who do not have access to the study of those languages in their mainstream school.

Representing the VSL Principal Dr Frank Merlino, Dr Holger Nord, (Senior Manager for the South-East region) encouraged past students to promote the Hindi subject to future students and recognised the opening of the new Point Cook centre earlier this year.
The VCE Hindi teachers were commended for their dedication to enriching the student experience and providing quality learning support to the students. Parents were also praised for transporting their children to classes every Saturday morning and encouraging them to persevere.
Whilst a majority of the students who completed VCE Hindi were of Indian origin, it would be rewarding to see the non-Indian students undertake this subject. Teachers of Hindi, and families who speak Hindi, need to promote the language to the rest of Victoria. India is a booming economy and the preference for this language should be as high as French and Chinese.

More schools should be encouraged to teach Hindi; a language that ranks in the top five most commonly spoken languages in the world. With its close relationship to Sanskrit, Hindi is a fundamentally important language with unique historic roots.
Leaning a language is important and every student should be encouraged to learn a language other than English. Knowing a foreign language will assist you at home, with friends, in the workplace and when you are socialising/networking. It shows respect, a willingness to associate with others in different places of the world and an effort to make communication easier.