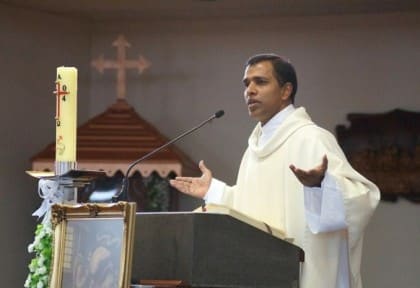 Bearing no ill will towards his attacker, Father Tomy Kalathoor Mathew, the Melbourne priest who was recently stabbed in an isolated but racially-motivated hate crime on 19 March, has resumed duties at St Matthew’s Catholic Church in Fawkner North, celebrating Sunday mass with parishioners.

The 48-year-old cleric, who hails from Kerala, was stabbed in the shoulder by a disgruntled parishioner who took exception to his Indian background. He was lucky to escape with non-life threatening injuries.
“You are Indian, so you must be Hindu or Muslim and are not qualified to deliver mass,” the man stated before attacking the priest with a knife.
The incident took place in the church foyer, as the priest was about to begin the 11am Italian mass. The man has since been charged with intentionally and recklessly causing injury and will face court in June.
Narrating the incident, Fr Mathew told Indian Link that the parishioner, who was not a regular visitor, had accosted and racially abused him a week prior about his ethnicity. He also later found out that the attacker, who is of Italian descent, had enquired about the “Indian” priest while he was away for holidays in January.
“I was uneasy about his anger towards me and my Indian heritage and notified the Parish Council, but I never expected this move from him,” Fr Mathew told Indian Link.
St Matthew’s welcomes believers from many different linguistic and cultural backgrounds including those of Italian, Polish, Indian, Sri Lankan, Vietnamese, Iraqi as well as Anglo and Irish backgrounds, and has celebrated this diversity by employing ministers from different nationalities.

“We have a wonderful community here and naturally they were all shocked – particularly the Italians, who were ashamed by their compatriot’s ignorance,” Fr Mathew said. “The attack was no doubt the work of a mentally sick person who needs our support and sympathy. We should pray for such people so that they may not cause harm to others, and they may be able to get the light of truth.”
“I am also truly grateful to God for having made this incident for promoting the virtue of forgiveness and God’s ever loving care,” he said.
Downplaying the racial overtones, Fr Mathew emphasised that it was pure ignorance that fuelled the unfortunate incident. Indeed, there are nearly 20 million Catholics in India.

“Many people think that India is a Hindu country. They do not realise that there is a substantial Christian following that dates back many centuries, as well as many other religions. We must be lovers of humanity in all its diversity, which is very significant in a nation like Australia where we are all from different origins.”
Fr Mathew has nevertheless been overwhelmed by the gestures of support he has received from work colleagues, parishioners, police, health care providers as well as the Indian Consulate.
“The consular service offered to me was prompt, personal and well beyond the call of duty,” he noted.
“They treated me like they would their own family member,” he added with gratitude.

The priest, who arrived in Australia five years ago, also has nothing but praise for the generosity of this beautiful country.
“I am not concerned about such happenings in future,” he said. “I have always believed Australia is not a racist country. It is truly welcoming and multicultural. This was what I used to tell my friends and family back in India who were concerned about the racism in Australia. I would love to believe the same even now.”
Fr Mathew, who relocated to Melbourne in 2012, belongs to Kalathoor family of Karimbu in Anakkampoyil and became a priest under the Thamarassery diocese in 1994. He had previously served at churches in Adakkakundu, Vettilappara, Kallurutti and Chundathumpoyil, and worked as a teacher at Alphonsa School in Thamarassery.
Expressing shock at the appalling incident, the Catholic Archdiocese of Thamarassery was relieved to hear about miraculous escape.
“Due to God’s grace and the special robes for the mass the knife didn’t go deep and just injured the neck muscles,” Abraham Kavilpurayidathil, chancellor and spokesperson of Thamarassery diocese stated, adding that Fr Mathew is determined to stay on and continue his good work.
“People should never be treated like this,” said Shane Healy, a Catholic Archdiocese of Melbourne spokesman, condemning the attack. “Fr Mathew is doing wonderful work for his parishioners and this is really a blight on the great work that many, many Catholic priests are doing.”