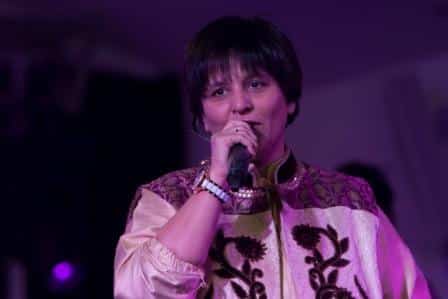 Reading Time: 2 minutesPREETI JABBAL joins a huge audience as they twist and twirl to beats from the queen of dandiya

Recently I found myself at Caulfield Racecourse in Melbourne; however I could very well have been in Ghatkopar or Goregaon in amchi Mumbai given the massive crowd, the hustle and bustle, the stunning traditional outfits and an unmistakable vibe in the air. All the brouhaha had nothing to do with races or equestrians, it was for the much-awaited Falguni Pathak show.

A brand in herself, Indian pop singer Falguni has ruled the dandiya scene for decades now. Mumbai Navratri festival celebrations are synonymous with Falguni Pathak, and in the past few years fans across the globe have also got a taste of Falguni’s fervour during the festive season. She has performed in many countries around the world and it wasn’t her first show in Melbourne, however, it was the first time that a dandiya show was organized in the carpeted venue inside Caulfield Racecourse. It was also the first time NM Events organised a dandiya bash on such a large scale. Hiccups were expected, especially with crowd management, but there was a visible security presence outside the venue to keep things under control.

Inside the venue, the crowd flow required more attention. Nearly 2000 people, most of them dandiya enthusiasts and Falguni fans thronged to the venue in their finery, and they were not there to merely watch. They were all geared up to dance the night away to Falguni’s popular Bollywood-inclined and super-hit songs. Space became a constraint as the dancers got together in various scattered groups instead of one large circle, as is the tradition. With Falguni performing in one corner of the hall and the sea of people dancing in front of her, the venue was packed to capacity, chaotic but quite happening.

In a remarkably sweet voice the androgynous dandiya queen sang all time favourites like ‘Lal Lal Sanedo’, ‘Odhni Odhu’, ‘Dholida Dhol’ and her most popular number, ‘Pari hoo main’. Catering to the mixed audience, she sang Hindi, Gujarati, Marathi and Punjabi songs and the crowd lapped it all up with relish. Accompanied by a troupe of 24 artists, Falguni paced her appearance through the night while allowing other singers to entertain the audience. It was obvious that the audience were mainly interested in dancing, which they did with gay abandon. The air was vibrant with colours of the outfits and vivacity of the dancers. As ghagras swirled and kurtas swished, the venue resounded with music and the event in general, turned out to be frenzied but fun.