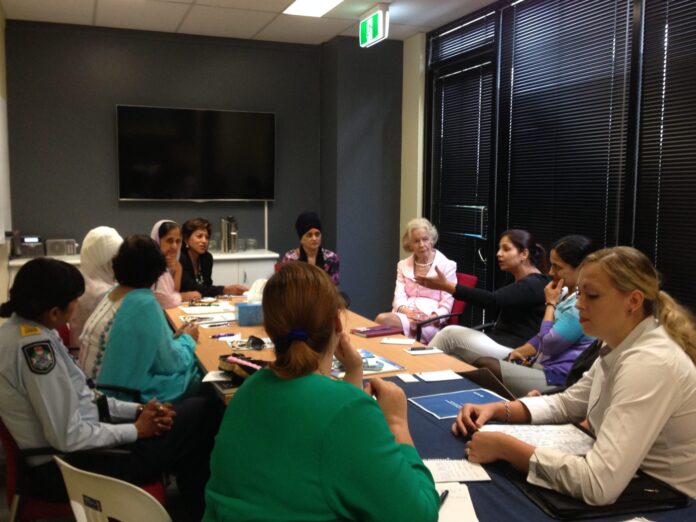 It’s a form of violence often brushed under the carpet with great ease. It is taboo to talk openly or seek help, for fear of bringing dishonour and shame to the woman, her family and society. It happens frequently behind closed doors.

Domestic violence has become an increasing cause of concern in recent times, with various movements and campaigns initiated to spread awareness on this issue.

One such initiative has been implemented by the Queensland government, which set up a special Domestic Violence Task Force to look into domestic and family violence in the state. Chaired by Quentin Bryce AD CVO, former Governor-General of Australia, the final report will be presented to the new Premier later this month.

Along with members of the taskforce, Ms Bryce has been visiting communities across Queensland for the past few months. Recently they met up with women across diverse fields of the Indian sub-continental communities in Brisbane to discuss the prevalence of domestic violence within the community and strategies to curb abuse.

Ms Bryce said that every morning we hear terrible things about families on the news yet, “People will not talk about it, but it’s everywhere.”

In recent times, Ms Bryce believes, “The sense of neighbourhood and community has lessened, and as leaders we need to talk.”

She spoke of how the Domestic Violence Task Force has been working at a local level, listening and learning the thoughts of Queenslanders about how best to tackle the issue. “DV (Domestic Violence) is getting worse. There are 178 cases handled everyday by Queensland Police Service,” Ms Bryce said.

Jodie Randall, a detective with Queensland Police, pointed out that domestic violence is a cycle; children watch their parents and they continue the pattern of behaviour. She suggested that the community should adopt ways to prevent domestic violence, as well as ways to educate children at an early age. She encouraged a need for a change in legislation, wherein the person to commit an act of violence could be put behind bars immediately rather than going to and fro between the courts.

Speaking from the Indian community perspective, Kamaljit Athwal, from the Sikh Nishkam Society of Australia, said that the victim of domestic violence usually neither has a supportive husband nor any support from her/his family. If the victim is put up at someone’s house for a night or two she (the victim) will have to bear consequences later, often from the family.

Yasmin Khan, of the Eid Fest Association, suggested members of the community could start a new fund where money could be raised to support a victim’s stay in motel for a few days.

‘How can we reach out to the women?’ was an important question directed to the panel. Some women suggested we educate the women at religious venues, as this is one place where women come together and we could hold sessions for them or we could educate the religious heads – be it at temples, gurudwaras, churches or mosques.

There were again a lot of ‘what ifs’ raised. Some argued victims who do attend the session may get noticed by their family or friends which could again create problems within their family. There was also the question of whether religious heads would talk about domestic violence in their sermons.

The interfaith communities comprising Hindus, Muslims and Sikhs came together last year in Queensland to spread awareness on domestic violence through a state-wide poster campaign. (reported in Indian Link). The posters that were put up in religious spaces received both positive and negative responses. Certain religious places have still refused to put them up.

“It’s in all of us as community members to educate our menfolk, and let them know this is not acceptable; education of the community is essential,” pointed out Vinita Khushal, of Bridges Family Law Specialists. She further said that the community needs to hold more regular sessions, get more men on board and let them talk from a third person perspective. She also stressed the need to get more therapists and social workers involved.

One member on the panel rightly pointed out that, “When I was helping a friend through troubled times, I told her ‘You are the one getting abused not the community. The minute he even lifts his hand, you need to leave immediately.’”

The discussion on domestic violence among the members renewed the energy and hope that we as a community can definitely make a difference.
“We have a long way to go in empowering women, we need to get into action. Too busy? Too bad! Do it,” Quentin Bryce implored the women present.