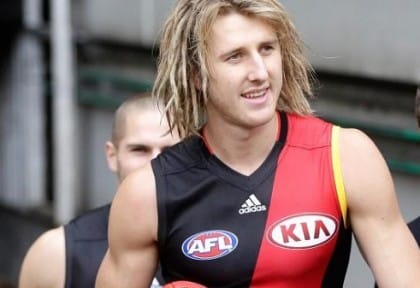 The shape of the ball never fails to amuse Indian audiences new to AFL.
Dyson Heppell had to get accustomed to this pretty quickly when he travelled in India conducting footy clinics not so long ago.


“They were initially confused with the shape, but a natural talent came out very soon,” the new Essendon captain tells Indian Link. “Especially the girls – they seemed to have a good knack for it and I was quite surprised at their attitude. They had a good go! And I was happy to see them picking up the ability to kick. It’s hard to teach these skills…”
The charismatic Heppell will soon be dealing with more Indian – and other multicultural – audiences in his new role as Multicultural Ambassador for the AFL.
He was one of 19 players named as ‘Australia Post AFL Multicultural Player Ambassadors’ this week (including four women players), in its push to engage a wider audience.
“As an AFL player, I have the capacity to influence social attitudes and add value to development programs,” Heppell observes.

Sport can indeed be an effective tool to help migrants integrate into society. It offers a platform to connect with the mainstream community.

Just ask Trevor Banerjee, who founded Masala FC in Greater Dandenong in 2012 after playing for an India team in AFL’s International Cup.
“There is an essential yaarana (camaraderie) about AFL that I simply love,” he says. “It’s called ‘shepherding’: I have the ball, and if someone tackles me, my guys will protect me. On the field, your differences dissolve; you look after others like your own brothers.”
It is this kind of yaaraana that Dyson has clearly shown he is after.
Footy clinics held across the nation and overseas that he has participated in, have brought in new fans as well as players.
“The crowds are definitely getting more and more multicultural,” he acknowledges. “Seeing players such as Majak Dow and Lin Jong in action gives confidence to people of their specific communities. They are role models and people love to watch them play.”


Some 15 per cent of AFL players across its 18 clubs are from multicultural backgrounds.
Will we see an Indian-origin player in the AFL any time in the future?
Dyson is optimistic. “Yes they are coming up, and in Essendon in particular. There are many pathways, and I think it is a matter of time.”
The India v Pakistan game is on again as part of the Friendship Cup this year.
“That will be an interesting one to look at,” Dyson agrees. “We’re encouraging all to participate. It’s a positive and vibrant environment in AFL at the moment, and it’s great to see people having a go and loving it!”

After troubles with racism and homophobia in the past, the AFL has been working hard to build a more inclusive spirit. It has been pushing to move beyond its Anglo-centric culture, including instances of appalling behaviour by the crowds, and commentators’ public condemnation of offensive behaviour while privately condoning it.
AFL CEO Gillon McLachlan has personally apologised to victims and encouraged people to call out such behaviour, with perpetrators banned from games, and even offered cultural awareness training.

‘Multicultural development officers’ have been appointed to increase the reach of the sport. Sudip Chakraborty, one-time captain of India’s AFL team and single-handedly responsible for popularising the game in India, now works with the AFL and Essendon in particular to take the sport to the Indian community in Victoria in a role created for him.
A ‘Multicultural Round’ in the footy season (Round 19) is now a regular inclusion.
A ‘Multicultural Ambassadors’ program, launched in 2013, further engages multicultural communities through a network of dedicated volunteers. Targeted attempts have been made at the Indian, African, Greek and Arabic communities.
“Essendon has a strategic plan especially in north-west Melbourne,” Sudip Chakraborty tells Indian Link. “Craigieburn also boasts of a pure Indian Auskick Centre that is supported by the Craigieburn Gurdwara.”
“The club is also interested in identifying Indian talent in the sport, the reason why Kevin Sheedy, one of the biggest legends of the sport, went over to India recently to attend the annual National Championship run by AFL India. Kevin helped shortlist the team that would be travelling over to Australia in August this year to participate at the AFL International Cup 2017.”

Essendon FC also organises a special GloBall program where international students and migrants are taken to the Etihad Stadium or MCG to watch an AFL match for free, with guides explaining the rules to them.
Meanwhile, Dyson Heppell continues to tell interesting stories from his time in India, including working in Mother Teresa’s institution at Kolkata and playing footy with street kids on the lawns at Victoria Memorial.
Oh, and also, becoming a ‘terror suspect’ briefly.
“We were returning from playing close to the Bangladesh border,” he reminisces, laughingly. “These soldiers carrying guns charged on to our bus… it was quite scary, let me tell you, but it all came good in the end!”
- Advertisement -
Share
WhatsApp
Facebook
Twitter
Linkedin
Previous articleBura na Mano, Holi hai!
Next articleA tale of two cities