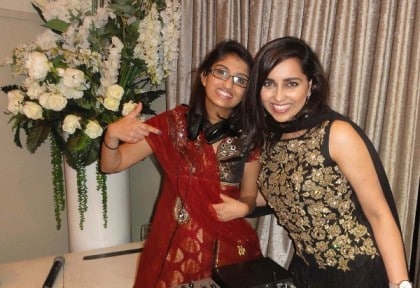 The Indian community’s peak doctors’ body, AIMGA coaxes members to let their hair down for charity

It was the younger doctors that claimed the night at a recent charity event called Doctors With Talent.

Organised by the Association of Indian Medical Graduates Association (AIMGA), the annual event raised funds for local community organisation Samarpan, representing families with a member with a disability.
Alongside a raffle, silent auction and fundraising games, the event also accorded our respected doctors a chance to let their hair down. Many of them showcased hidden talents.
It was a humorous hark back to uni days with dermatologist Dr Ajay Kumar, who relived those first eighteen months of training that were spent in dissecting the human body.  He did this via popular Bollywood lyrics such as:
Lekar hum, forceps scalpel
Phirte hain, muscle muscle
Kahin to mil ja, kisi kone mein
O nerve to latissimus dorsi
Taram pam, lekar hum, forces scalpel…

Drs Ahad Khan, Upkar Goyal and Surendra Mohan channelled their inner Hindi playback singers, and Dr Anju Aggarwal her inner dance diva.
Third year medical student Heeral Thakkar’s dance troupe Avartan also wowed with their stage number.
But it was the young Dr Abhinav Rajkumar that brought the house down. A keen musician and linguist of sorts, he presented the iconic Aussie number ‘I am, you are, we are Australian’ and then followed it up with an Indigenous version. True to his Indian-Australian identity, he then took on the multilingual ‘Mile sur mera tumhara’ with perfect intonation in all its multiple Indian languages. And as if that was not enough, he then presented the Indian national anthem with an accompanying sign language version. Simply marvellous, Abhinav!

Heeral Thakkar and Shavanya Mohan’s presentation on their Medical Students’ Aid Project (MSAP) project revealed a talent of a different kind, and a passion for social justice. The program provides food to 180 rural school children in Gujarat three times a week, along with education about basic health and hygiene.
Drs Rashi Minocha and Varun Chandra showed off their own talents at playing MC.

In keeping with the ‘talent’ theme, it was wonderful to see musician and philanthropist Avijit Sarkar felicitated for his fundraising for cancer. In the past six years, this well-known community personality has raised thousands of dollars to help support those involved in the treatment of cancer, research, advocacy, prevention and support services. (It would also have been nice to see professionals from within the Indian medical fraternity honoured for their achievements and service at this occasion. Recognition from their peers would have been a wonderful gesture as well as a source of inspiration to the students and young doctors present on the night. The Australian Government honours lists each year include Indian-origin doctors who have served in far-flung rural areas, at the cutting edge of medical research, and those at the advocacy level.)
Dr Sunil Vyas, President of AIMGA, told Indian Link later, “It was a very successful night. We did something different and I think all had a good time. It was also very heartening to have contributed meaningfully to Samarpan.”

Prof. Smita Shah, head of the charity subcommittee that organised the event, added, “I’d like to thank the committee members and guests and participants of the night. It was especially great to see the participation of the younger doctors, and the passion that they bring to the profession as well as to community event such as this. We’re also delighted to have been able to support kids and families at Samarpan.”
The proceeds of the evening, held at Manjit’s Function Centre at Concord, went towards Samarpan. A sum of $6000 was raised on the night, Dr Vyas revealed. Starting off as a small informal support group between families in 2002, Samarpan has today gone on to become a registered association, which even took out a NSW Carers Award recently. Samarpan aims to build support structures for people with disability, improve their quality of life, create opportunities for their participation in society at all levels, and to advocate for their services.

Some Samarpan families were present at the AIMGA event. Uday Shah and Jayvant Vaidya spoke of the difficulties their own families faced, as even friends gradually began to avoid them. Samarpan has helped close the gaps in many ways.
Check out the websites samarpan.org.au and aimga.org.au