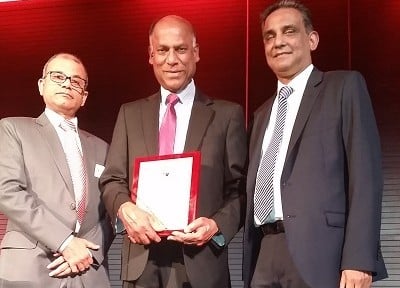 Doctors of Indian origin are recognised by their peers

The South Australian Indian Medical Association (SAIMA) presented its President’s Award to some of its distinguished members at a glittering charity fund raising function last month.
Two Indian doctors who have made impressive contributions in their area of speciality, and a Sri Lankan doctor of Indian origin with decades of service to the rural community were felicitated at the event held at the prestigious Adelaide Convention Centre.

The three award recipients are Dr. Pravin Hissaria, Immunologist; Dr. Vinod Aiyappan, Respiratory and Sleep Physician, and Dr. Parasuramar, General Practitioner.
The event was attended by over 300 Indian and Australian doctors and their partners and a number of prominent medical and political identities from both sides of politics.
SAIMA President Dr Arvind Sehgal highlighted the contribution of Indian doctors in healthcare to the community in general and rural community in particular. Besides providing medical services, they play an important role in being a source of comfort to the growing number of newly arriving Indian migrants coming from diverse regions.  Saddled with the issues of settling down in a different environment, the new migrants feel a sense of comfort in consulting doctors who speak their language.
Dr Sehgal added, “With the increasing number of Indian doctors in the past 10 years, SAIMA has a stronger voice and is recognised in the medical and the wider community. The eight-year-old association now has 250 members, starting with 70 at inception.”
Dr. Hissaria, honorary consultant at Royal Adelaide Hospital and Senior Immunology staff specialist at SA Pathology, the largest laboratory of its kind in the state, has keen interest in research in areas affecting patients with seleroderma, rheumatoid arthritis and chronic urticaria.  He has set up an autoimmune tissue bank that will help in the discovery and validation of novel biomarkers related to these diseases. Pravin has received several grants to further progress in these areas as Head of Translational Clinical Research Laboratory in SA Pathology’s Human Immunology division.

A graduate of the Gujarat University, he started working in Australia in 2003 and in 2005 won the Eddie Hirst prize for scoring the highest marks in the Royal College examinations. He has authored several national and international publications and participates in committees of the College of Pathologists and e-Health Task Force.

Dr. Vinod Aiyappan is Respiratory and Sleep Physician at Flinders Medical Centre, Lecturer at the Flinders University and Consultant Physician in Bariatric Management and Intervention (BMI) in Southern Adelaide Local Health Network. The citation accompanying his award read, “He is actively involved in research and recently given a national grant from Motor Neuron Disease  (MND) Research Association for a novel study on sleep disorder in  breathing.  He is an active member of various professional organisations and is the co-chair for Australasian Sleep Association’ Dental Council. A winner of Jack Alpers post-graduate prize in respiratory medicine in 2012, Dr. Aiyappan has to his credit numerous articles in professional journals.”
The third recipient Dr. Parasuramar, popularly known as Para, has contributed over three decades to rural health as a general practitioner in country town Kapunda, north-west of Adelaide. Born in Colombo to a prominent gynaecologist father as fourth of 14 children, he came to Adelaide in 1974 and five years later bought a practice in Kapunda. He has been working there ever since
He is one of the remaining practitioners of a vanishing breed of multi-dimensional rural doctors who perform surgery and obstetrics. Because of his keen interest in these areas, Kapunda still has a country hospital while most others have closed for lack of surgical activity. Last month he was presented with the Rural Doctors Association Long Service award by SA Governor Hieu Van Le.

Para was a prime mover in founding Adelaide’s Ceylon Tamil Association and along with his inter-state compatriots lobbied the government for granting refugee status to Sri Lankan Tamils, thousands of whom have now settled here. He is also a founding member of SAIMA.
The event’s main focus was to raise funds for Maranatha Hospital in Uganda. Established by Adelaide doctor Michael Findlay who went there as a medical student more than ten years ago, it now has 40 staff and treats 1200 patients a month.  A tidy sum was raised along with a handsome donation from ENT surgeon Dr. Suren Krishnan, who gives a cash award to a bright Indian medical student each year.
As the awards presentation formed only a small yet significant part of the function, Nigel Domann, MC kept the audience in stitches (to the delight of the surgeons present) with his card tricks and other comical acts, proving that laughter indeed is the best medicine.