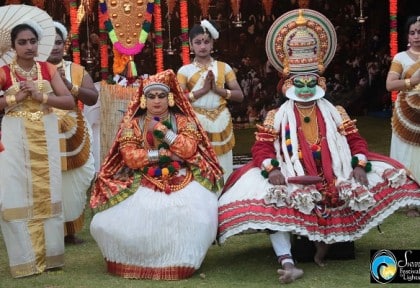 The 2016 Swan Festival of Lights was held over the weekend of 28-30 October at Elizabeth Quay in Perth. Last year’s festival focused on the state of Gujarat. This year the festival put the spotlight on “God’s own country” – the southern Indian state of Kerala.

Perth audiences enjoyed a world-famous Kathakali performance by Margi Somadas and Troupe, Kalari martial art performances by Nithya Chaithanya, as well as a spectacular Chenda Melam performance by The Perth Shinkary Club. The festival featured a rich smorgasbord of multicultural dance, music and art performances. World-renowned sitar maestro Ustad Usman Khan and sarangi maestro Ustad Dilshad Khan performed at the event.
The Kerala community in Perth came together as one to support the festival.
“Up to 200 families supported us over the last 3 months…they dissolved differences between the 8 or 9 representative associations. I am proud of the outpouring of love from the community,” Arun Krishnan, event organiser, told Indian Link.

Dressed in colourful traditional Kerala attire, and sporting many an extravagant fake ‘mo’, volunteers offered photo opportunities for festival-goers. The bracing wind threatened to blow the fake mos away, as Perth’s prolonged winter chill made them shiver in their tropical summer weather costume, but community volunteers wore a brave face and a warm smile!
The Swan Festival of Lights – hosted by Saraswati Mahavidhyalaya (SMV) and Annalakshmi Cultural Centre – was supported by the City of Perth, Government of Western Australia – Office of Multicultural Interests, Metropolitan Redevelopment Authority, Healthway promoting the LiveLighter message, Lotterywest and Synergy. Annalakshmi, SMV and TFA are run by the devotees of Swami Shantanand Saraswathi drawing inspiration from his vision of selfless service through arts and charities.

The festival was held at the iconic new Elizabeth Quay venue close to the waterfront. Though a prestigious venue, it held some challenges for the organisers. In the words of Arun Krishnan, “We had to ramp up security because of the risk of someone falling in the water. The venue is not a flat large area like Langley Park so there was not as much space for the stage and food stalls…”
Despite the challenges, the grand Spanda architecture and the waterfront served as a stunning backdrop for the fireworks and the Aarthi dance. Patrons were able to purchase and float a lamp on the river quay with part proceeds going to the Down Syndrome Association of Western Australia (DSAWA) and Siva Shanta Mother & Child Centre (SSMCC).

Besides Indian culture, the festival featured Cossack dance, Aboriginal dreamtime stories and the Chung Wah Chinese dance forms. Though Deepavali is an Indian tradition, in the words of Arun Krishnan, “All our cultures believe in the universal theme of light over darkness. We learn so much from each other…”
How difficult was it to organise an event of this scale? “The planning takes one year,” Arun Krishnan opined. “We are primarily a spiritual organisation with limited funds. We can only run the event with the support of our local and international volunteers and financial assistance from our sponsors.”

In the performance “Feet on Fire”, the stage was set alight – literally – by the fusion of Flamenco dance and Kathak. As the mesmerising duet unfolded on stage, a little girl stood close to the stage, her face reflecting her rapture. The festival brought out the child in all of us, giving spectators many wondrous moments, capped off by fireworks that lit up the Perth skyline at the end. With an estimated 40,000 people visiting the festival this year, over three days, the Swan Festival of Lights has become a marquee multi-cultural annual event of Perth bringing the community together to celebrate Deepavali.