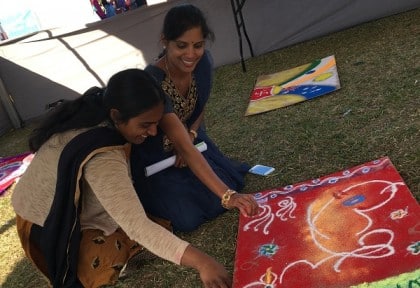 It’s a great way to celebrate Diwali in Sydney.
The Hindu Council’s Diwali Mela or Deepavali Fair invariably turns out to be a fun-filled day: there is entertainment, fun and food, catching up with friends, the burning down of Raavan, and, to round off, some superb pyrotechnics.

The Council has been organising this celebration since 1999, and has seen this become the prime cultural event of the year within the community. It has become progressively bigger and better each year, with many volunteers pooling their technical strengths for a blockbuster show.
This year, some 25,000 plus revellers and visitors attended the day-long fair at Parramatta Park. The $5 entry ticket turned out to be a good idea this time round.

With this mega show, the Hindu Council has put India’s rich religious and cultural legacy very much in the limelight. Mainstream television channels jostled to give coverage this year. The many Caucasian visitors, kids in tow, were not just curious onlookers, but happy participants. The Diwali mood touched all as they took in the colours and the flavours, the infectious dancing and the incredible music.

Stand-outs amongst the entertainment were Shivgarjana, the Marathi drummers (wonderful to see the girl drummers matching the boys beat for beat); Ruchi Sanghi’s kathak dancers; Shiamak Davar’s Bollywood-style dancers, and the Bhangra and dhol boys.
Mark Orowin and friends of Aashrya Asmi attracted their own crowds at the Hare Krishna marquee: their divine devotees danced away, oblivious of all else but the music, even as curious little kids wandered in and out of their special kutir style eco-friendly display home.

And of course, if you were in the market for a real home, you in all probability signed up with one of the many builders that were around, selling their plans. By far the biggest group amongst all the non-food stalls at the event, they were no doubt filling in a demand as communitywallahs look to build their dream homes.
The cameo of chef Harpal Singh Sokhi (of “Namak Shamak” fame), in a cooking contest, could have had better promotion, though.
The food stalls themselves, however, did not need any special promotions. If you didn’t have a jalebi or a dosa, a bhel puri or a masala chai, a meetha paan or a bhatura while you were there, you missed out majorly.

And the special blessing ceremony at the temple marquee was a wonderful addition this year. (“I feel truly blessed,” Mala Mehta commented to Indian Link as she walked out.) Let’s hope this is a tradition that will continue at future Diwali melas.
The special guests from state and federal politics impressed not only with their own Bollywood-inspired fashion, but also their knowledge about the ancient Hindu tradition that they were participating in, and their use of Indian languages.

Truly laudable to see the Council felicitate some quiet achievers and role models in the community: Dr Jayker Dave, a leading Sydney orthopaedic surgeon and volunteer with the Australian Armed Forces, and the late Kamlesh Chaudhary who contributed much towards the teaching of Hindi in NSW schools.
As the sun began to set, the chill came in; indeed so strongly that many people began to leave. However, as dusk set in, it was wonderful to see the ticket window become busy again, as hordes of people began to arrive to see the fireworks.
Raavan may have looked like a schoolkid’s giant project as he stood at one end shimmering in his silver and magenta outfit, but to the Hindus gathered there, he was the baddest baddy that ever lived. And when he burned down at the end of the night, it was as if all the evil in the world had symbolically been brought to an end. The world was rid of all negative energies: we were cleansed, and safe. (Of course the negative energies also stand for those within our own selves: we must all identify the Raavans within us, and purge them out.)

And with all this purity around, there should be rejoicing: the night sky lit up with little balls of fire, and completely delighted the crowds.
The organising committee’s Dr Nihal Agar, Sanjeev Bhakri, Tarachand Sharma and many, many more volunteers, put in many months of work to pull it all off.

Sydney’s annual Diwali Mela actually turns out to be an even better way to celebrate Diwali than in the traditional Indian way, but for the fact that near and dear ones are missing. We still dress up, greet all our friends, stuff ourselves silly with mithai and food, and enjoy some fun fireworks, and do all this minus the noise and environmental pollution that Diwali in India is now reduced to.
A big thank you to the Hindu Council and the army of volunteers who put the show together: you make it better every year!