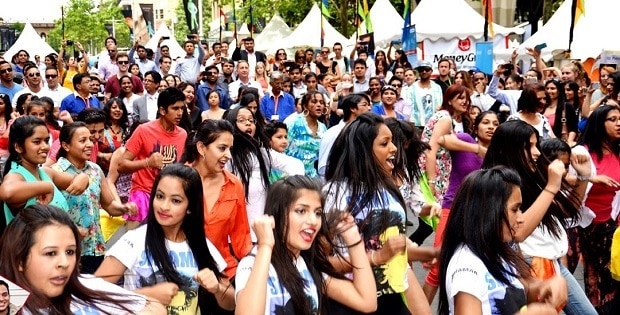 Reading Time: 3 minutesTo the delight of the workforce, Martin Place was transformed into a riot of music, festivity, colour and celebration, writes ASTHA SINGH

It was that time of the year between Dusshehra and Diwali, that the pre-Diwali celebrations were held for the second consecutive year at Martin Place in Sydney’s CBD. The October 17 celebrations included the India Calling initiative, loads of stage performances, flash mob dances, attractive and colourful traditional costume stalls, henna, rangoli and other art stalls, and naturally, Indian food stalls. The day-long event was organised by the Hindi Council of Australia (HCA), and included more than 300 performers, participants and volunteers. Over 6,000 people visited through the course of the day.
The event kicked off at mid-day with a warm welcome and the Australian and Indian national anthems. Students from Cronulla, Mascot and Ashbury Public Schools participated in the India Calling feature, and were joined by Double Bay, Canterbury, Annandale, Carlton South and Janali Public Schools.
It was amazing to see the young Cronulla Public School kids depicting the story of the Ramayana dressed as Rama, Sita, Lakshman and Hanuman. Mascot Public School students walked on the stage representing people from different Indian states, wearing Punjabi, Rajasthani, Tamil, Bengali and Kashmiri costumes. This was followed by dance performances to Jai ho and Twist by the Ashbury Public School students.
(The India Calling program encourages school children to learn respect for each other’s cultures, customs, language and religions, and provides them an opportunity to meet on significant days in the Indian calendar and participate in cultural activities).
The colours and energy of Martin Place during a busy working Thursday was phenomenal as people from different backgrounds walked around, curious to check out the action behind the music they must have heard through their office windows. By 12:30pm and during lunchtime, the area was jam-packed.
Of course the portly God of Good Beginnings, Ganesha, was invoked in the traditional Ganesh Arti, and the Deva shree ganesha dance set off the dance mood.
There was Bollywood dancing, a flash mob dance and even a dance class with Balam pichkari steps taught to an interested audience. Garba, laavni, bhangra and the inevitable popular Bollywood dance numbers followed. The dances were energising and greatly applauded by the audience, including the ‘whistlers’ amongst the crowd who had increased in number.
Meanwhile, the henna stall saw a lot of traffic with ladies and even men wanting beautiful designs applied on their hands and arms. The expertise of the henna artists won them over in no time! The costume photo booths offering the opportunity to be photographed in traditional Indian dresses also saw a lot of visitors.
The most exciting and spirited session however, was towards the end of the day when the workforce had finished their day and all sorts of city-goers were interested to join the Diwali celebration buzz! This segment was versatile, starting with classical and instrumental performances, before moving onto Bollywood and traditional fusion performances.
The garba performance by ISSO Blacktown, Tagore dance by Arpita, the presentation by the Lotus Dance School and an innovative and colourful performance by Abhinav School of Arts were also a part of the session. The ‘100 years of Bollywood’ performance entailed dance numbers from golden oldies to contemporary numbers.
The other notable performances of the evening were Rhythmic Squad, a Bollywood mash up; Shiamak Group; Pallavi from CK Performing Arts; Raas garba fusion by ISSO Blacktown; dhol giddha group paniri led by Reema Randhawa; and dhol beats dance floor with DJ Dimple. The competent MCs for this session were Australian and Bollywood actor Nick Brown, and Hindu Council members Emie Roy and Leah Briars.
The cultural programs were managed by Anita Sharma and Sanjay Khanna, and the event was well organised by Sanjeev Bhakri, Raman Bhalla, Bhupinder Chhabra under the sincere guidance of the Chairman of the Council, Prof Nihal Agar. Distinguished guests included the Indian High Commissioner Biren Nanda; Consul General Arun Goel; MP Phillip Ruddock; MP Craig Kelly; MLC David Clarke; MP John Robertson; MP Matt Kean; MP Geoff Lee; Councillor Gurdip Singh; and ex-Councillor Dilip Chopra.
The event was well received as indicated by the number of visitors who attended the event, and it has been hailed as a great success. Many visitors left all eager to attend the Hindi Council Diwali fair, to be held on a much grander scale, only a few days later.