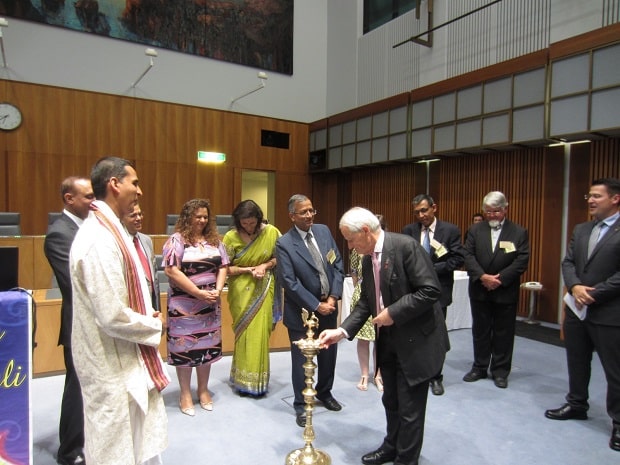 On December 2, Diwali was celebrated by the Federal Parliament in Canberra, co-hosted by the Hindu Council of Australia (HCA) and was very well attended by a large number of parliamentarians, community and religious groups, media organisations and diplomatic heads. Over 150 guests attended the celebration which has become a platform for the Indian diaspora to mark their contribution to Australian multicultural society.
Bill Shorten, Opposition Leader spoke at the commencement of the event, regarding the increased involvement of the Indian community in Australia since the last decade. “I understand that Diwali is a festival celebrated to recall happiness, acknowledge fresh accounts of business and prosperity, and relive the bond between brother and sister,” he stated, also commenting on the remarkable inclusiveness, closeness and kindness of the Indian community.
Bala Subramaniam then invited members of different faiths to light the ceremonial lamp (diya). Distinguished guests such as the Hon Concetta Fierravanti-Wells; Mr Surinder Datta, Deputy High Commissioner of India; Professor Nihal Agar, Chairman HCA; His Excellency Mr Rudra Kumar, Ambassador of Nepal; Mrs Cheryl Brown-Irava; members of the HCA and parliamentary members were welcomed, among others. Ms Manasa Chintakindi performed the welcome song, ‘Prathama suman sri ganesha’, followed by anointing guests with a teeka, as per tradition.
Speaking on the occasion, Prof Agar thanked all for the great success of this year’s Diwali Fair in Sydney. “By holding Diwali celebrations in Parliament House, we celebrate cultural diversity and multicultural inclusion of Australian society,” he stated.
Ms Fierravanti-Wells, looking radiant in her lovely bright green saree, acknowledged the assistance of Senator Zed Seselja for supporting this initiative, and congratulated Prof Agar and the HCA for its ongoing commitment and dedication, and for presenting a united voice on behalf of the Australian Hindu community. “We are blessed to live in a country where people have the freedom to worship, express and practise their faith without intimidation or interference, as long as those practices comply with Australian law. In Australia we are committed to creating a society where diverse cultures, religions and races peacefully co-exist and contribute to universal peace and harmony,” she stated. “In tonight’s celebration, we extend our hand of friendship to all Australians seeking to promote and increase our understanding of different faiths. We need to continue to promote community harmony and understanding between different faiths. Living harmoniously and respecting one another are the cornerstones of a successful multicultural society,” she added.
Ms Michelle Rowland, MP Shadow Minister for Citizenship and Multiculturalism, and Shadow Assistant Minister for Communications, emphasised the significance of Diwali and her respect for Hindus and the HCA, that is very inclusive and accepting of other cultures.
Mr Datta then spoke about the meaning of Deepawali and the triumph of good over evil through the symbolism of light, while elaborating on the history and significance of the festivals for different faiths and occupations.
Next, Kanti Jinna, Vice Chairman HCA mentioned the record presence of 25 MPs and 9 senators at the Diwali celebrations, followed by a presentation on Diwali by Sanjeev Bhakri, which covered its elaborate history, meaning and different facets of the festival.
Mr Seselja, Liberal Senator for ACT delivered the Prime Minister’s message, and Lisa Singh, Labor Senator from Tasmania enlightened the guests about the spiritual and fun side of Diwali. The first Hindu and Indian Senator in Parliament, Ms Singh acknowledged the contribution of the 400,000 people of Indian origin here. She spoke about Diwali beyond Hinduism as a broader faith that exhorts good citizenship and humanitarianism. Senator Singh also hopes that Diwali will one day be a public holiday in Australia. “To me, (Diwali) reaffirms the things in life that matter most, that life’s greatest joys are the simple pleasures that come from spending time with people we love. (Diwali) is also an opportunity to celebrate the strong relationship between Australia and India,” stated Ms Singh in a message to Indian Link.
The Hon Philip Ruddock, MP Member for Berowra, NSW then spoke about Australia’s political history since PM John Howard, stressing that the HCA’s origin in the 90s has helped others to learn and understand Diwali. “I invite others to participate and make Australia an even greater nation. We are not perfect, but better than everybody else,” said Mr Ruddock. He also mentioned the great multicultural society of India that itself signifies inclusion of different faiths, different religions and cultures, and goes very well with the Australian way of multiculturalism.
The event concluded with a vote of thanks by Prakash Mehta, Director, HCA and an acknowledgment of the assistance from Senators Ms Fierravanti-Wells and Mr Seselja, and His Excellency Mr Biren Nanda, High Commissioner of India and their staff in presenting the program. Delicious traditional sweets and refreshments brought the taste of festive food to the attendees.
The event was vibrant and remarkable, with inspiring speeches and distinguished guests. Diwali has been celebrated in Parliament since 2004, and this year’s event marked yet another positive comment on Australian multiculturalism, indicating that our seat of government is available for all to share and enjoy.