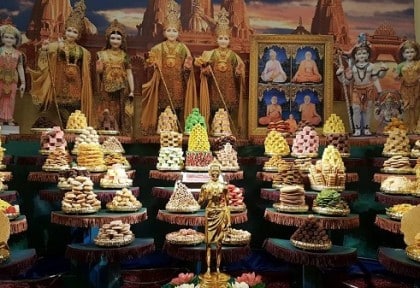 The BAPS Swaminarayan Mandir, recently organised a grand Diwali and Annakut celebration at the Parliament of Victoria. This is the third year since this major festival was first hosted in the Parliament. The spectacular Diwali display and celebrations in the iconic building represented genuine bipartisanship in a multicultural space.

The Queen’s Hall saw a change of ambience as the festive Annakut (mountain of food) took pride of place near the entrance. Tiers of vegetarian food were arranged in a traditional preparation in front of an altar. The lofty hall wore a festive and colourful look as the deities from the Mandir presided over the auspicious proceedings.
The Queen’s Hall also hosted a three-day exhibition with information that enhanced knowledge of Diwali, the largest Hindu festival, and offered a glimpse of Indian culture and traditions. The exhibition and festivities were held in collaboration with 19 other leading organisations in Victoria.
The festivities began with bhajans or thaals being sung to offer delicacies to the deities of Shiv Parvati, Radha-Krishna, Sita-Rama Bhagwan Swaminarayan and other Gurus. A ceremonial aarti was conducted by all the dignitaries and Mandir priests, accompanied by Vedic chanting. The traditional lamp was lit by BAPS esteemed guest Bhagat Prakash Ji Maharaj from India.

Sitesh Bhojani, the master of ceremonies, introduced the program, and Geeta Devi from the Hindu temple welcomed the guests. Youngsters were encouraged to share their perspective of Diwali and Hinduism and several vibrant cultural items were presented. It was surreal to hear Sanskrit shlokas, sung by young children, reverberate in the halls of the Parliament.
In his address, Telmo Languiller, Speaker of the Legislative Assembly, said that this was a dream come true for multiculturalism in Victoria. One of the greatest strengths of Victoria is their diverse and harmonious multicultural community and celebrating cultural diversity is a big part of the Australian way of life. He acknowledged Opposition Leader Matthew Guy’s contribution in making the initial commitment to hold the festival in the Parliament.

All the other speakers wished everyone a Happy Diwali and asked people to take time to look for the joys in life and embrace the values of family and traditions.
Makarand Bhagwat, representing Hindu Council of Australia, provided a brief vote of thanks. He urged everyone to reflect on the spiritual meaning of Diwali of discarding darkness and negativity and bringing forth light and positivity. Towards the end, Prasada (religious offering) was distributed to everyone.