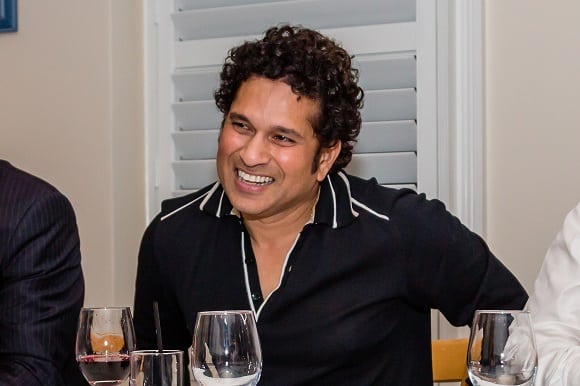 Reading Time: 5 minutesA relaxed and friendly Sachin Tendulkar opens up about the ups and downs in his cricketing career

Sachin Tendulkar is the most beloved cricketer – and arguably, sportsperson – in history. For nearly 25 years on the international stage, he thrilled audiences around the world, making an almost seamless transition from boy prodigy to all-conquering veteran along the way. His achievements and statistics do not require mentioning; even those unfamiliar with the game are aware that he is synonymous with it. It was a surreal experience then, for a small group of extremely fortunate individuals to find themselves at an intimate and exclusive Sydney dinner with the Little Master last month.
The event was held in aid of the Apnalaya charity organisation, which works with the poorest slum communities in Mumbai to help them achieve a better quality of life. In keeping with the exclusive theme of the event, the venue itself – the iconic Doyle’s on the Beach restaurant in Watson’s Bay – was only revealed to guests a few hours before the 7pm kick-off.

Upon arriving, most guests were lucky enough to be introduced to Tendulkar personally, enjoying unprecedented access to the man widely regarded as the greatest batsman since Sir Donald Bradman. Even as a typically spectacular Sydney sunset lit up Watson’s Bay in countless hues of a rich, deep red, it was Tendulkar, casually chatting with guests on the balcony, that drew your attention. Everything about him was immediately captivating; his calm and unusually relaxed demeanour, his patience and willingness to give time to each and every invitee, even the careful adjustments he made to ensure that his high-octane wristwatch stayed visible at all times.

The night was headlined by a uniquely candid Q&A with Tendulkar, conducted by event MC and Indian Link Media Group CEO, Pawan Luthra, as well as an auction featuring some truly stunning pieces of Sachin Tendulkar memorabilia. In between, of course, were photo and autograph opportunities with a man who, for a generation, defined not just his team’s, but his country’s identity.
Tendulkar’s detailed and carefully considered answers to the questions posed to him provided doosras to even his most knowledgeable fan. For instance, did you know that Tendulkar’s least favourite bowler to face was not McGrath, Lee or Ambrose, but the late South African captain, Hansie Cronje? Or that his most cringeworthy moment on the field was being dismissed by Lasith Malinga in the 2011 World Cup final after wrongly convincing himself the ball had stopped swinging? And that in Tendulkar’s opinion, apart from Bradman, the three greatest batsmen in the world were Sunil Gavaskar, Sir Viv Richards, Brian Lara?

The game today
The hour-long Q&A session saw Tendulkar give fascinating insights into his thoughts on the state of cricket today. To begin with, he surprised the small audience by stating his displeasure with the “predictable” ODI format, revealing that he has specifically advised the ICC to consider remodeling the traditional 50 overs-a-side game into a 25-overs per innings, Test match style contest. He also criticised the ICC’s decision to reduce the World Cup to 10 teams (presently, 14 teams contest the tournament) in its next edition, arguing that this will only set cricket back – the aim, he stressed, should be to have as many teams playing in the World Cup as possible.
As has been evident in this World Cup, and reiterated by Tendulkar, the Associates are catching up – their performances in this World Cup have been competitive to say the least, with Ireland and Afghanistan impressing in particular. In Tendulkar’s view, even 25 teams should be seen as a possibility – and in order to ensure competitiveness, the Associates should be given more opportunities to play against top-quality opposition from the Test-playing nations, particularly through A-team tours to Associate countries.

The last innings
The showpiece auction item was a signed and personalised print of the famous, award-winning photograph of Tendulkar walking out for his last innings in international cricket, taken at the Wankhede Stadium in Mumbai. Accordingly, it was only fitting that Pawan Luthra asked Tendulkar to share his thoughts on the emotions that ran through his mind as he walked out to bat that afternoon.
Immediately, Tendulkar’s thoughts turned to his mother, who, remarkably, had never watched him bat, despite the fact that he played 200 Test matches and 463 one-day internationals. But, for his last Test, to be played against the West Indies, Tendulkar had made arrangements to ensure she would be there to watch on – not the least of which was his request to the BCCI to move the venue for the Test to Mumbai so his mother, who is disabled, would be able to attend. He eloquently described the moment that his mother’s face was shown on the big screen in the last over of the day, only to be followed by his wife’s face just one ball later. Tendulkar also joked that it must have been a ploy by the West Indians to make him emotional and dismiss him.

An Australian love affair
It is no secret that Tendulkar loves touring Australia, and having been here regularly since his first tour in 1991, the country, and Sydney in particular, hold several special memories for him. It was the quality of the Australian team throughout his career – indisputably the best team of his generation -that made Tendulkar feel that “if you perform against Australia, the whole world takes notice”, and be able to go back to his hotel room with a real sense of achievement and satisfaction.
Sydney was the scene of what Tendulkar feels is perhaps his most dominant and rewarding performance ever in a Test match. After coming into the 2003-04 series down under in spectacular form, Tendulkar was disappointed to find himself failing to make a 50 in six innings, gifting his wicket away rather than making the bowlers earn it. Before the final Test in Sydney, he resolved not only to shelve his favoured drive through the covers, waiting instead for the bowlers to stray onto his pads, but to stay unbeaten for the entire match. What followed was a simply staggering display of concentration and bloody-minded discipline – Tendulkar reeled off scores of 242* and 60*, batting for over 12 hours without being dismissed.
Australia does not hold exclusively happy memories, though -despite his perennial flair for diplomacy, Tendulkar admitted suspecting that the umpires on his 1999/2000 tour of Australia, during which he was infamously given out shoulder-before-wicket by Darryl Harper, “did not like [his] face”.
Sitting in Tendulkar’s presence, time seemed to become irrelevant. Just as it has always been, when Tendulkar was in the spotlight, all responsibilities and priorities seemed to fade away, mere distractions to the main show. But, all too soon, the adventure was over. After a small wave to his guests, who would have happily eaten with Tendulkar at the restaurant all week, he walked back through the gateway to his own world.
And once again, Sachin Tendulkar became that unattainable, religious figure we have always known, and it was hard to believe he had been dining with you at all.

More photos and videos from the event:Indian Link Australia Facebook