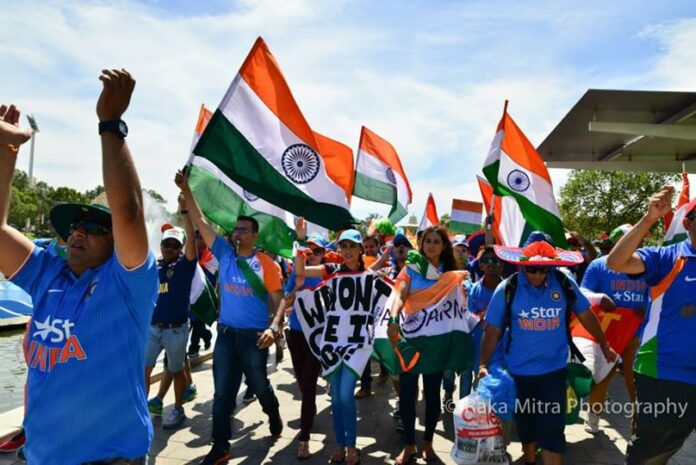 Reading Time: 4 minutesAs always, the World Cup match between India and Pakistan was about much more than just cricket

Cathartic. If a single word could ever adequately capture the experience of attending a World Cup match between India and Pakistan, that would have to be it. After all, those who were there to see India triumph over Pakistan in Adelaide would have collectively described the match as religious, yet liberating; intense, yet therapeutic; emotional, yet soothing. It was as if everyone at the ground knew that they belonged there, that Adelaide Oval had become home for the day. You would have been hard pressed to buy a ticket from a fan, whatever price you named.
Upon landing at Adelaide airport, your suspicions were confirmed; this was not going to be a quiet weekend in the South Australian sun. In the same way Indian fans on the plane began to shout “Jeetega bhai jeetega, India jeetega” as the plane touched down,so too did the flight crew wish each passenger good luck for the match, and the locals comment on how Adelaide was suddenly feeling a lot like Mumbai.

Although it was the opening weekend of Adelaide’s famous Fringe Festival, there was a shared understanding between everyone that just for this particular weekend, something much bigger was brewing; something that transcended society and culture to be intrinsically linked to the identity of over a billion individuals, scattered across the entire world.
And so, on Sunday morning the pilgrimage to the ground began. Polite nods were exchanged between fans in the hotel lobby; some playful sledging between fans of the contesting teams was inevitable, yet tempered with mutual respect and camaraderie (a lesson that some international cricketers would do well to learn).

Three hours before the first ball was to be hurled down the pitch by Mohammad Irfan, the majority of Pakistani fans partied together on the grassy area outside the East Gate, while Adelaide Oval carpark played host to a number of Indian pre-parties. Boisterous in their anticipation, they blasted anthems such as Chak De India and Loongi Dance from their car stereos, warming up their vocal cords and practicing their dance moves with blatant disregard for their dignities, or the sweltering 39-degree heat.
Yet amongst the carefree nationalism there were several heartwarming scenes. A lady, dressed proudly in blue, painted Pakistani flags on the faces of strangers. Not to be outdone, the same Pakistani fans demanded that she paint Indian flags on their faces too. Near the Elder Park Rotunda, where India’s Swami Army were gathering in force for a pre-planned march across the bridge to Adelaide Oval, an Indian girl yelled at a large group of Pakistani supporters walking to the stadium: “Pakistan Zindabaad!”
As the gates opened, the fans – some of whom had been lining up since early morning (perhaps unnecessarily, given the quality and efficiency of the faultless new Adelaide Oval and the 1500 individuals who were engaged in helping the match run smoothly) – flooded in immediately. But there was no calm before this storm.
The party, which for some responsible adults kicked off on Adelaide’s city streets the previous night, was simply entering its next phase. As MS Dhoni won the toss, the crowd roared its approval as though the job was already done. And when the Indian national anthem reached its crescendo in particular, goosebumps were but a formality.
The match itself was a celebration of culture; a festival typified by Hindi music, the constant rhythm of dholis, the spontaneous bhangra breakouts, the delicious curries, and above all, a crowd united by passion, rather than divided by nationality. And it was this that made the game such a pleasant and positive occasion.

The greatly diminished animosity between Indians and Pakistanis in younger generations brought up abroad, as well as the neutral venue, ensured that there was no scope for hostility as might have been in the case for those with ingrained prejudices.
Cricket has often been used as an excuse to bridge the traditional political tension between India and Pakistan; but at some point, it is accepted that the game can only do so much to ease a long and almost unwavering conflict between two incredibly proud countries.
The 42,000 fans cheering on their teams at the Adelaide Oval proved, however, that cricket can help us transcend prejudice between ourselves, if not between our elected leaders. And it is this truly unique but elusive outcome from a gentleman’s game that makes matches between India and Pakistan so undeniably special.