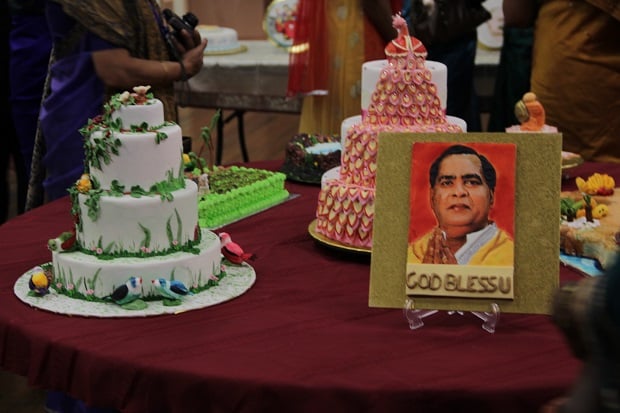 Reading Time: 2 minutesAttendees enjoyed a feast of a book launch, film trailer and array of cakes in a single evening

Over 50 renowned intellects from South India attended a special multi-event function on September 4 at Menzies Hall in North Dandenong, under the auspices of the VGP Ulaga Thamil Sangam. Also present was Dr VG Santhosam, Chairman of the VGP group of companies based in South India.
The event saw two books launched, written by Shaantha Jeyaraj. The first was a non-vegetarian international cookbook, and the second was a short storybook titled Tharunangal (Moments).
Next, followed a cultural cake show displaying a variety of different colourful and unique cakes designed with precision and in a variety of themes from village scenes to a portrait of Mother Theresa. There were also tiered cakes, but the highlight of the show was a portrait of Dr Santhosam made out of icing.
A seven minute trailer of the feature film Ilamei (Youth) was viewed by the audience. The film was released by Rajsha Productions, a Melbourne-based production company with a crew of 20 to 30 film and theatre professionals. The company also specialises in filming of arangetrams (dance graduation ceremonies), weddings, festivals and special occasions, as well as in creating documentaries and short films, stated Ghirija, its Managing Director.
Palkalaikkalanjiyem (the Academy of Fine Arts and Home Economics) that had been inaugurated by Shaantha Jeyaraj in 1995 in Perth, and has successfully functioned for nearly 15 years, was re-inaugurated at the event. The Academy aims to promote Indian culture and tradition among the younger generation living in Australia.
Palkalaikkalanjiyem had been organising an annual variety show called Kalaicharam (A garland of arts) annually in Perth.
Despite the event being held on a weeknight, it was well attended and enjoyed by all. Kudos to Shantha Cakes and Rajsha Productions for an interesting evening.