Creating harmony around the dinner table 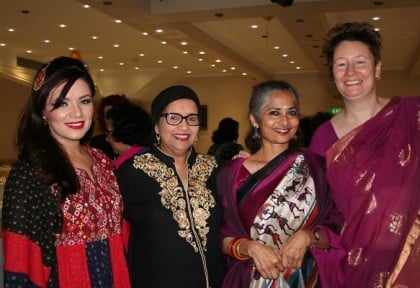 Representing various linguistic minorities, value systems and working backgrounds, the inaugural Women of Diversity Dinner (WDD) brought together a wonderful assortment of Australians for a celebration of family and community harmony. The unifying theme was the strong desire to break down artificial barriers and make a difference in their adopted homeland.

With the rallying call of “Harmony begins at home”, the original custodians of the land and subsequent waves of migrants broke bread, forged friendships, and shared stories with refugees fresh off the boat from trouble-torn regions, including Syria and Afghanistan.
Facilitated by Settlement Services International and Ethnic Communities’ Council of NSW in conjunction with SAHELI, NSW Jewish Board of Deputies, Assyrian Resource Centre, Muslim Women’s National Network and several Christian groups, it was a thought provoking evening as women from across Sydney examined issues affecting themselves and the communities they live in
Australia’s first Indigenous female MP Linda Burney was guest of honour. Master of Ceremonies Jennifer Wong, Wiradjuri elder Aunty Fay, African Women Australia founder Juliana Nkrumah AM, and diversity and inclusion strategist Najla Turk regaled the audience with some powerful messages, while Chitra Cynthia Nathan shared her deeply personal tale of rejection, acceptance and belonging in a moving family context. Chitra’s story was shortlisted from a number of submissions.
“The idea was to bring women from diverse backgrounds together, to eat, rally and build relationships around an issue of shared focus,” SAHELI spokesperson Shanta Viswanathan told Indian Link. “It was heartening to see a room full women, in their best spirits, from diverse backgrounds at the start, change from being strangers to acquaintances, eventually becoming friends by end of the night.”


SAHELI passionately believes that while there are many Indian-focused associations, there has been very little interaction with women from other migrant communities. Refugee and migrant women’s challenges, irrespective of which communities they belong to, are fundamentally akin to one another. Indigenous Aboriginal and Torres Strait Island women face even more historic challenges in Australia. One of SAHELI’s aims is to build social and economic bridges in the community.
“I think we happened to do just that with WDD,” Shanta said. “This was only a beginning. From here we hope to build on establishing closer and stronger relationships with women from diverse communities to work together on projects of mutual interest and concern to benefit our communities.”

Community paediatrician and WDD facilitator Shanti Raman is particularly concerned that multiculturalism and the celebration of diversity is under threat in Australia with the rise of Pauline Hanson and her support base. It is also under severe threat globally with concerns about the rise of Islamic fundamentalism and the unprecedented numbers of people seeking refuge, she noted.

“Cross-cultural dialogue can become a powerful tool for peace building,” Shanti said. “I think that women have a strong role to play in countering negativity, fear and aggression, with our unique ability to connect with each other, share stories, food, music and dancing. This is what the Women of Diversity Dinner was all about, and we were overjoyed with the response to this first event.”
“What was particularly gratifying was the wholehearted response we got from Linda Burney,” Shanti continued. “We were able to celebrate diversity from the first nations people of Australia to the most recent arrivals to this country.”


This sentiment was echoed by languages crusader Mala Mehta OAM. “It was enlightening to hear what Linda Burney MP had to say, and Juliana Nkrumah was so right when she said that “charity begins at home” as I too believe that women are powerful beyond measure,” Mala reiterated.
“They are constantly trying to keep peace at home, with a strong impact on their children and spouses. This then extends beyond family to the community around them building links and creating harmony. At every stage in our lives we have a role to play and it is important for us to be conscious of, and respect, other cultures.”
Over a year in the making, the Women of Diversity Dinner was conceived initially by women from the NSW Jewish Board of Deputies, who have already had successes with getting inter-faith dialogues happening between different groups of women. SAHELI was specially invited by the Deputies to be part of the working group.
Some inspiration came from the ‘Shared Table Project’, an award-winning intercultural program aimed at breaking down barriers, stereotypes and prejudices through women sharing cooking and stories. The core group discussed a number of options before it crystallised into a dinner event.
“From this it was a bit of a leap to reach out more widely to women of culturally and linguistically diverse backgrounds, but retaining the core concepts of sharing food, stories and good times,” Shanta said.

The NSW Jewish Board Deputies built a coalition of willing women with active representatives from Settlement Services International (SSI), Ethnic Communities Council of NSW, SAHELI and other specific faith groups. This gave the Indian women a unique opportunity to engage with women from other migrant communities, Shanta explained.
Buoyed by the success, grander plans are already afoot for the years to come.
The gathering was treated to a multicultural meal, prepared entirely by refugees from the community, and included a selection of flavours from around the world. Dharshani Goonatilleke from Monsuun Dance Group shared traditional Sri Lankan and Bollywood moves that certainly got the women grooving.
As Mala Mehta tweeted, “What a heart-warming event, there’s nothing like being in a room with 300 amazing women.”
Photos: Hayley Coombes
- Advertisement -
Share
WhatsApp
Facebook
Twitter
Linkedin
Previous articlePower and prejudice
Next articleAn artist in constant transition