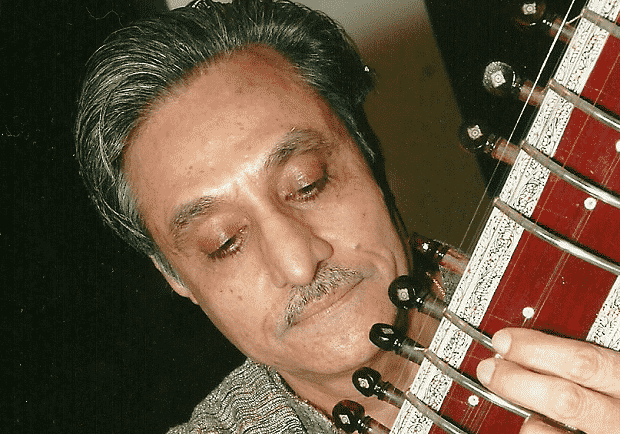 For service to the arts through classical Indian music

A lifetime’s involvement in music for Melbourne’s Radhey Shyam Gupta has been recognised with the Order of Australia medal for service to the arts through classical Indian music.

Delighted and ‘humbled’ by this honour, Radhey Shyam described his musical journey that has resulted in an immense contribution to the propagation of Hindustani classical music in Australia.

Born in Agra, India, Radhey Shyam has been involved with music from the age of 6. After winning several trophies and accolades for his musical talent during his school days, Radhey Shyam achieved the Sangeet Visharad (graduation in music) from Gandharva Mahavidyalaya in Mumbai in 1966.

In 1971, the young musician joined IIT Delhi to complete a degree in Textile Technology where he befriended many professors who supported his association with music. He went on to learn techniques and intricacies of the sitar from renowned Indian radio artist Anil Dhar, and he also did a stint at the Gandharva Mahavidyalaya in Delhi.

His career in Textile Engineering took him to various places around the country and abroad, but he continued to nurture his musical pursuits. In 1991, Radhey Shyam migrated with his young family to Australia. His work took him to Albury and Geelong, but he held musical events in his spare time, which were well received by the local communities there.

Around 1997, textile became a fading industry in Australia and jobs were hard to come by, so Radhey Shyam decided to join RMIT to do a Diploma and then Masters in IT. Along with a new career path in IT, Radhey Shyam also started teaching music to a small group of people. The same year saw the birth of the not-for-profit organisation Sharda Kala Kendra.

“During those days there were no institutions that taught Indian culture, music, arts and language in Melbourne, so with the help of like-minded music lovers and supportive friends I started classes in sitar, vocals and harmonium in a local school”, recounted Radhey Shyam, sharing his inspirational story.

According to Radhey Shyam, music can be divided into three distinct categories: “There is pop dance music that affects the body, light music (including ghazals) that pleases the heart, and classical music that is designed for the soul”, he said.

“My life is dedicated to promoting music. I believe sangeet is a way to attain spirituality and a pathway towards Nirvana”, he said with characteristic gentleness.

Radhey Shyam’s reverence towards his art is reflected in the numerous performances in which he has been involved within Australia and India. He was instrumental in starting the popular Sangeet Sandhya that has, for 17 successful years, been providing a free forum for amateurs and professionals to display their musical talent. The Sangeet Sandhya has since branched out to also offer Sahitya Sandhya (literature and poetry), Raag Rung (pure classical Hindustani music) and Swar Sandhya (karaoke-based singing).

In January 2013, Radhey Shyam was also awarded the Multicultural Award for Excellence by the Victorian Government for excellence in service delivery to the community through arts. He is currently involved in spreading musical education to the whole world at no cost, through his website www.sharda.org. Thousands of students around the world have access to printable notations and video lessons of the sitar, DVDs of vocals, sitar, bhajans and ghazals through this website. Radhey Shyam has been spending considerable time and effort in recording hundreds of videos where he teaches various musical instruments, making it easier for beginners to have a thorough understanding of Indian music and musical instruments.

Steeped in classicism and yet willing to explore the new without compromising on tradition, Radhey Shyam has illumined the local scene of music for decades. He is supported by his wife Anita and daughters Kokil and Vidushi, who are ‘absolutely thrilled’ with their dad’s achievements.

Awards in the Australian honours system represent the highest level of recognition accorded by Australia for outstanding achievement and service. These honours recognise community values and celebrate what is important and unifying in Australian life. Radhey Shyam epitomizes this sentiment towards the community as he continues his efforts to promote Indian music and culture.