Connecting to the skies 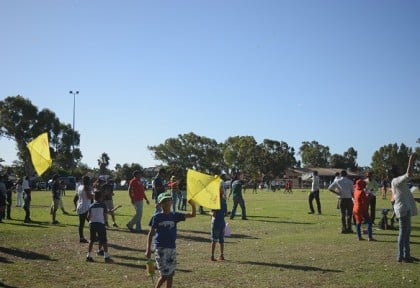 Hindu festival brings the community out with their kites

It may have been a scorching sunny afternoon, but spirits were high for Perth’s very own kite fiesta and frolic. Hindu Swayamsevak Sangh Perth and the Gujrati Samaj of Western Australia celebrated the Kite Flying Festival in January at Jubilee Reserve.

Members of the Gujju community and many others energetically joined the fun at the showgrounds, adding to a crowd of more than 600 people.
Luckily for the kite-flying enthusiasts, the day was windy and everyone was able to enjoy the activity to the max. Gujaratis enjoy this festival of kites called Uttarayan with much enthusiasm. With the onset of the season of harvest for farmers, this festival is celebrated with the popularly known name Makar Sankranti.

The sky was choc-a-bloc with kites. Arriving late to the venue means you missed out on the right spot. Health and safety instructions were doled out before anyone could purchase the kites. Local Indian restaurants had savouries on hand for the festivities, while a drinks stall was organised by HSS senior shakha. Kids relished their ice creams and the bouncing castle, and onlookers relaxed on their picnic rugs.
Stalls sold kites, phirki, finger protectors too and all at very reasonable rates.  There is a certain art to kite flying. Manjha is the thread tied to the kites. It is not simply a thread, but one coated with powered glass so as to make it powerful and sharp.

Kite flying is very much a team activity. In India, families get together on the roof or terrace on a sunny afternoon and send their kites soaring high. Giving the right amount of tension, kite quality, wind direction, trajectory and the correct launch – one can go berserk trying to control the minute details of it all.

Of course, like with all our festivals, there is deep symbolism to the ritual of kite flying in Hinduism. But there’s a spiritual element to it all too. A recent article in Indian Link by clinical psychologist Saroja Srinivasan noted that not only is this a popular leisure activity, “It also gives a sense of hope and higher aspirations, looking to the cosmos and the wind for inspiration, and the enjoyment of the freedom of our spirit.”
Mr Kishore was invited on stage to explain about Hindi Swayamsevak Sangh, an organisation which aims to establish Hindu community in order to preserve, practice and promote Hindu ideals and values. They are involved in shakha activities, yoga, games, spiritual lectures and so on.
The candidate from the Liberal Party Jim Seth spoke a few words too.

As spots of lively colour littered the blue skies, memories were refreshed from those childhood days of flying kites in the Indian skies.
For instance, kite flying, another popular Hindu ritual at this time of the year, is enjoyable as an activity, but it also gives a sense of hope and higher aspirations, looking to the cosmos and the wind for inspiration, and the enjoyment of the freedom of our spirit.