Confluence: A sangam of arts and culture 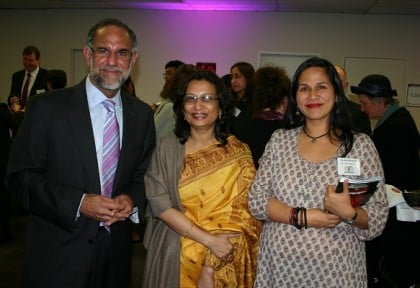 A fantastic line up of artists and creative enterprises from India will soon be arriving in Australia to participate in Confluence – The Festival Of India In Australia. The major Australian centres of Melbourne, Sydney, Alice Springs, Brisbane, Perth, Canberra and Adelaide will witness a tapestry of artistic performances that will celebrate India’s culture and creativity.
Melbourne in particular will prove its cultural credentials with majority of the events taking place in iconic venues in the arts capital of Australia. There will be opportunities for dialogue and collaborative exchange between Indian and Australian performers, visual artists and designers.


The seven-city Festival will be held between August and November 2016 and showcase a uniquely Indian experience beyond Bollywood and Cricket, though the two have inevitably found places on the festival schedule.
Manika Jain, Consul General of India in Melbourne hosted a formal media launch recently to reveal details of the Festival, preparations for which have been underway for over a year. India’s Prime Minister Narendra Modi floated the idea of the Festival during his visit to Australia in 2014 as a key deliverable of the MOU between India and Australia in the field of arts and culture.
Navdeep Suri, High Commissioner of India in Australia led the project along with his team and with the support of sponsors. A funding of $250,000 has been granted by the Australian government to extend and deepen the understanding between the two countries, according to an official statement from Minister of Arts Mitch Fifield.
Speaking at the launch in both Sydney and Melbourne, High Commissioner Suri outlined the vision of Confluence (sangam) as the meeting of ideas and ideals, arts and artists, cultures and civilizations in a manner that the streams coming from disparate directions meet, blend and imbibe something from each other and create synergies.
He expressed the ambition to build upon the Festival to make it sustainable and ongoing whilst ensuring that it is mainstream and accessible to the broadest possible arts loving community. According to the High Commissioner the objective of the Festival is to share acts ranging from classical to contemporary that are not commonly accessible to audiences in Australia.
The Festival repertoire includes performances by artists from the renowned Kalakshetra Foundation, Nrityagram, Pung Cholom, Raghu Dixit project, Sonam Kalra and the Sufi Gospels. A Hindi rendition of Shakespeare’s Twelfth Night (Piya Behrupiya), the mastery of puppets from Ishara International Puppet Trust and poetry rendition by Australia’s Got Talent fame Sukhjit Kaur Khalsa are expected to enthral audiences.

The visual arts components include an exhibition where Indian cartoonist Ajit Ninan will collaborate with Herald Sun political cartoonist Mark Knight. (From an early look of the schedule, this seems to be one of the rare features where a real confluence occurs, in terms of a collaborative effort of creative energies.)
Stainless steel exhibits will reflect the life of Mahatma Gandhi promoting peace, nonviolence and equality. Architecture by Indian designer Bijoy Jain will include the design of M Pavilion in Queen Victoria Garden.
An exhibition of vintage musical instruments from Calcutta and several other local and international acts will be on offer through a combination of ticketed and free events. Federation Square, Melbourne Recital Centre and the Monash campus will provide a myriad of iconic event spaces, while in Sydney the iconic Opera house will form the venue – outside in the forecourt with the Bollywood workshop and inside in the Concert Hall with Sonam Kalra and the Sufi Gospel project and Piya Behrupia in The Studio.
High Commissioner Suri is keen to reach beyond Australia’s Indian community with this program.
“The festival should not be pigeon holed only for the Indian community,” he said explicitly. “It should have a broader interest from the  mainstream.”

The Australian Broadcasting Corporation (ABC) will provide the media partnership to the Festival. According to Managing Director Michelle Guthrie, Confluence will offer ABC the opportunity to curate stories and spark conversations about India’s rich cultural heritage and the ways in which it is intertwining with Australian culture.
“The ABC will ensure that the wonderful events that will unfold, as part of the Festival, will be shared with a wider audience,” she said during the media launch in Melbourne.
At the Sydney launch, the confluence had already begun, with MC James Valentine of the ABC trying a few words of Hindi, somewhat successfully!
The Festival is spread over four months and while acts are being sourced from India, some local acts that Indian-Australian as well as mainstream audiences will have seen frequently in the past, have been able to join the bandwagon of performers.
Perhaps a literary component would have allowed the confluence much more rigour: the rich pantheon of Indian writers in close interaction with Australian writers from like genres, would be a welcome addition to the melange of creative works on offer.
Regardless, our customary festive season, soon to be upon us, looks set to be mightily enriched this time round. Are you ready to dip your toe into this confluence?
- Advertisement -
Share
WhatsApp
Facebook
Twitter
Linkedin
Previous articleThe woman behind the voice
Next articleStop the lawlessness