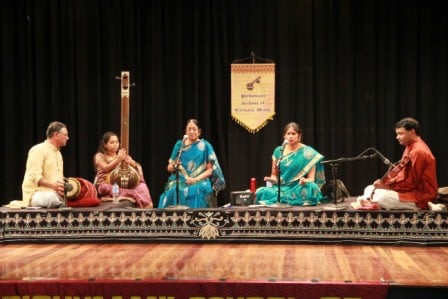 Pichumani School of Carnatic Music presented a vocal-duet concert by Smt Rama Ravi and Smt Nanditha Ravi on May 11 at the Wellington Secondary College.  The mother-daughter duo from Chennai is a torchbearer of the hoary Veena Dhanammal music tradition.  Smt Rama Ravi is an A-top graded vocalist, and her daughter and disciple Nanditha is an A-graded artist of All India Radio, Chennai.  Smt Rama Ravi sings Carnatic music of the golden era, having been trained by eminent musician DK Jayaraman, and T Viswanathan and T Brinda, renowned grandchildren of the legendary musician Veena Dhanammal.
Their style is very much grounded in the classicism of their guru’s tradition – a style that has more or less fallen on evil ways in recent times. Their unhurried approach to the rendition of the alapanas, kritis and kalpana swaras harked back to a bygone era, and those who like their Carnatic music soaked in the spirit of the an earlier period, would not have been disappointed.  The duo began the concert with a popular varnam in Kaanada, which set the tone for the rest of the concert.  It was so silky-smooth and melodious that the audience was unobtrusively drawn into their music. The kriti, Vinaradana was rendered beautifully, which they followed up with the popular composition Brocheva in raga sriranjani.  They gave it the full treatment, with a masterly session of kalpana swaras at the end.  The next kritis Nadopasana, Marivera dhikkevaru, followed by another in raga ananda bhairavi (Kaappaduve unadu bharam) were almost therapeutic to listen to – as their slow melody gradually enveloped the listener.  The raga saveri which brought up the next number had the hallmark of the Dhanammal bhani as well, with their well-chiselled and crisp kalapana swaras rendered in an unhurried style.  This was evident too in the duo’s concluding pieces.
They were accompanied by Melbourne’s own senior musicians Sri Murali Kumar on the violin and Sri Sridhar Chari on the mrudangam.