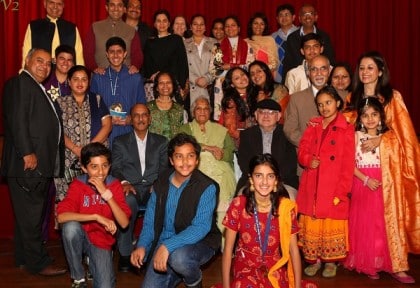 The highlight of this year’s Hindi Diwas celebrations 2016 at the IABBV Hindi School was the poetry recitation.

Students ranging from four to 18 years old were encouraged to recite Hindi poems of their choice.
Whether their presentations were just a few lines long, or ran for a couple of pages, everyone was encouraged to come up on stage. Like good sports, they got up in front of an audience of doting parents and friends, giving their Hindi language skills a go.
Four-year-old Kavish Juneja impressed with her recitation of Chuk chuk chalti rail and 16-year-old Surabhi Malik’s Veer tum badhe chalo was an absolute delight. Dhruv Saini’s poem Shiksha was well appreciated by all, and Pavani Channa’s Jhansi ki Rani was a great way for the youngsters to learn more about India’s first war of independence.

The Indo-Australian Bal Bharathi Vidyalaya Hindi School was started in 1987 by a group of passionate volunteers keen to keep the language of Hindi alive in the younger generation. Over the years, the school has grown from the initial handful of students, with Hindi now being taught in five centres and students numbering in the low hundreds, with many taking the language up to the HSC level.

Every Sunday, the quiet streets surrounding the Thornleigh West Public School come alive as parents bring their children to Hindi School. With a team of 20-odd teachers, its founder-coordinator Mala Mehta ensures that the school functions smoothly and that there is constant pressure on all forms of government to allow for the growth of Hindi as a language in the school curriculum.
As part of showcasing the work of the Hindi School, the celebrations had a number of attendees from the various arms of the government. The new federal member for Berowra Julian Lesser was present with his wife Joanna. Julian was actually himself a student at the Hindi School in 2012! Also present also was Matt Keane, MP Hornsby representing the Premier Mike Baird; Dr Geoff Lee, MP Parramatta; Damian Tudehope, MP Epping with wife Diane; and Jodi McKay, MP Strathfield. Dr and Mrs Vinod Bahade were present on behalf of the Indian Consulate Sydney.

Speaking at the occasion, Geoff Lee acknowledged the work being done by Mala Mehta and her team at the school and the importance of keeping the language of Hindi alive in the next generation of Indian Australians.
“I compliment the hard work done by all in ensuring that your culture is flourishing, and the importance which NSW gives to multiculturalism,” he said.
The celebrations also honoured those in the community who work hard to keep Hindi language alive, such as Vimla Luthra and Sant Ram Bajaj, who have published books of their creative works in Hindi.
It was a wonderful, family friendly day in which the community gathered to celebrate all things Hindi.