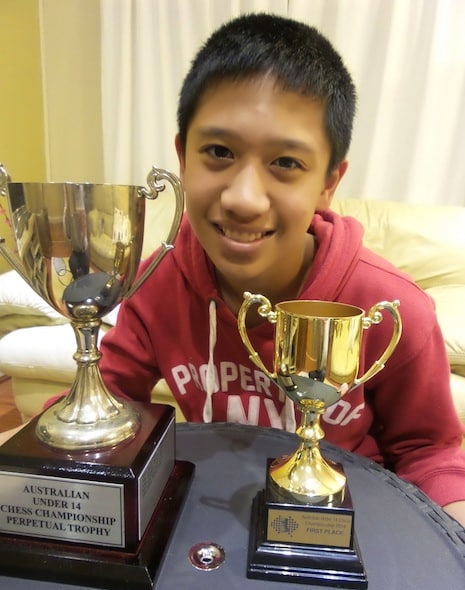 Reading Time: 3 minutesRishi Dutta is no pawn, but a king in the making

Every school holidays, a group of enthusiastic players compete against each other in chess tournaments organised by the Junior Chess League. Their numbers are increasing exponentially, making it one of the fastest growing mental sports in Australia and across the world. Chess not only stimulates the mind, it improves concentration and promotes high levels of forward planning and strategic thinking. While it is a stimulating pastime for most, those with grander aspirations often find that winning margins are slender and the decisions are ruthless.

One of the rising stars of the competitive chess arena is thirteen-year-old Rishi Dutta, with a rating of 1870. The rating is determined by chess organisations as an estimate of the strength of the player, based on previous performances.

The talented youngster stumbled into chess as a six-year-old, when he accompanied his parents to Rouse Hill Town Centre.

His mum Jin Tan recalls, “We would often take our boys to the library and it is there that Rishi first learned how to play chess”.

“My husband, Debashis, would teach Rishi the basics and they would regularly play against each other in the library while I read to my younger son. Within a few months, he was consistently defeating his dad and they would spend hours analysing the game afterwards,” she added proudly.

But it wasn’t until he was nine that he showed keenness for the game, she was quick to point out.

What truly sparked Rishi’s interest was a tournament at Matthew Pearce Public School, where he was enrolled in the opportunity class. Despite being a rookie, he went on to win the competition. Since then his rise has been meteoric.

The club manager, Peter Cassetari, was instrumental in Rishi’s improvement, often staying late after club games to teach Rishi, Tan acknowledged gratefully. Likewise Debashis has constantly mentored his budding talent, advising him on strategic openings and analysing the nuances of every move.

Rishi soon began competing in junior tournaments through NSWJCL eventually winning the state Under-12 Championship in 2012.

“This win gave Rishi a lot of confidence, and we view this tournament success as a breakthrough for him,” Tan told Indian Link.

At the national championship that followed,       Rishi came a close second winning 7.5 out of nine games, after a mentally exhausting, three-hour-long decider. In the end, it was a simple error that cost him the title.

“Until recently, Rishi has been a solid and somewhat defensive player, but recently he has been playing more aggressively to try and beat stronger players,” Tan noted.

Not one to rest on his laurels, Rishi is already gunning for bigger goals – to become a Federation Internationale des Echecs (FIDE) Master within the next few years and ultimately Grand Master of chess, a lifelong title.

In the interim, he has been quite busy competing in adult tournaments as well. He recently took part in the Doeberl Cup scoring an impressive five wins out of nine games, beating a player with a rating of 2192. He was also one of only five NSW juniors who took part in the Sydney International Open, managing to draw with highly rated players and eventually scoring another 5/9.

Another standout performance was his third position at the City of Sydney Championship (5.5/7).

Rishi narrowly missed out on the Under-18 title at the recently concluded NSW Junior Championships in North Ryde.

Also a proficient violinist and keen sportsman, Rishi is determined to win the national schools competition later this year.

Reach for the stars, Rishi!