Charity in the blood 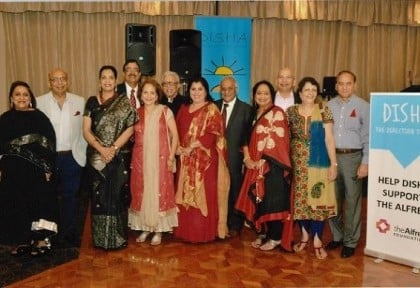 Humour ruled over haematology as Dr Stephen Ting from Monash University and Alfred Health delivered an enlightening and entertaining presentation on cancer at the Disha fundraising event held recently.


Dr Ting is currently the Director of Haematology at Eastern Health, Box Hill, Victoria and a Blood stem cell Researcher at the Australian Centre for Blood Diseases, Monash University.
Dr Ting’s presentation was based on his research in stem cell self-renewal and was titled, ‘Haematology diseases in the new world order’. His research aims to understand the molecular mechanisms governing haematopoietic and leukaemia stem cell self-renewal. He spoke about stem cell transplants and the importance of being a bone marrow donor.

The award-winning haematology clinician-scientist was the main speaker at Disha’s tenth anniversary dinner dance held at Lincolns of Toorak, one of Melbourne’s premium reception venues.
Despite the serious topic, Dr Ting managed to capture the attention of the audience, stimulated their imaginations and was influential in loosening a purse-string or two at the charity event.
Begun in 2006, Disha – the Direction to Hope is a not-for-profit organisation created to raise funds for worthwhile causes. Disha’s aim is to bring like-minded people together and foster involvement in community needs – especially cancer research and treatment.
Over the past ten years, Disha founders and volunteers Tara Chandramouli, Sunita Dhir, Suman Kanodia, Madhu Chauhan, Poonam Aggarwal, Anil Dhir, Neelam Bharadwaj and Arti Lakhani, along with their families, have supported cancer treatments and any other causes that have touched their hearts.

From palliative care beds to ECG machines, to scalp cooling machines for chemotherapy, they have raised thousands of dollars for various hospitals and equipment. In a decade, Disha claims to have raised and donated over $200,000.
Disha has its name on the honour walls of all major hospitals including Royal Melbourne, Royal Women’s, The Alfred, and Peter Mac. A ward at The Alfred has also been named after Disha for their contribution towards the ward’s requirements.

This year Disha donated $25,000 to the Alfred Hospital and $25,000 to The Eastern Health Foundation (Box Hill Hospital). Disha supported the Haematology and Oncology areas of these hospitals.
At the Disha Dinner Dance event, the three-course meal was as delightful as the ambience; both aesthetically presented and tasteful. The happy and universally flattering ‘touch of red’ theme ensured that the guests looked vibrant and felt the same in the international colour for blood cancer.

The organisers, to ensure that all aspects of the event ran smoothly, provided great attention to detail. Speeches were kept short and wine flowing as the audience was engaged in the true purpose of the event, raising funds.
Inspired by the saying ‘The gift of giving is in the power of one’, the Disha team held silent auctions as well as an innovative open auction to raise funds for hospital equipment including fall matt alarm floor sensors, wheelchairs, IV stands and temporal artery thermometers for The Alfred Hospital.

For entertainment, dancers from Gowri Dances of India presented a fusion of classical and global dances, mastering the heady mix of Bollywood and Bhangra with equal ease. It wasn’t long before the guests loosened up and hit the dance floor grooving to great oldies and fresh chartbusters.

After celebrating 10 years of existence, the team at Disha – the Direction to Hope will be handing over the reins of the organisation to the younger generation, who have already declared they will be doing things differently. It will be interesting to see them embark on a new direction, hopefully moving from strength to strength.
- Advertisement -
Share
WhatsApp
Facebook
Twitter
Linkedin
Previous articleHow to survive immigration
Next articleClickbait trend dominates cricket media