Celebrating the culinary diversity of India 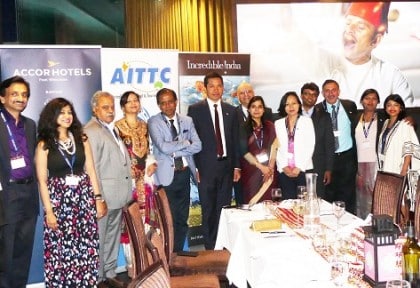 Indian cuisine ranks among the top five most popular cuisines in the world. It is judged as the most diverse, with the diversity in food being almost in direct proportion to the nation’s diversity in terms of geography, language, customs and culture.
As food is an important part of travel, this notion of diversity inspired the Australia India Travel and Tourism Council (AITTC), in partnership with India Tourism Sydney and Wendy Wu Tours, one of Australia’s leading tour operators to India, to present some samples of India’s culinary multiplicity to a selected audience of travel industry professionals at a recent event.

The key objective behind this initiative was share knowledge of Indian gastronomy and to motivate Australians, who love Indian food as much as the rest of the world, to visit India and experience India’s culinary delights while also savouring other touristic charms of the vast nation.
Over 75 guests, comprising travel agents, airline staff, hoteliers and industry personalities dominating the India-Australia tourism spectrum, attended the evening function at one of Sydney’s most elegant venues, Manjit’s @ the Wharf.
The event began with a video clip of Saransh Goila, a celebrity chef in India. He talked about various regional recipes and showed how a thali, a metallic plate, can be colourfully ornamented with mouthwatering items served in small metallic bowls. His presentation engaged the audience and their senses, and provided a good start for the evening’s theme which was to connect with incredible India through food.

The audience heard from the Consul General of India in Sydney B. Vanlalvawna, and Director of India Tourism Sydney Kanchan Kurkeja, about India and its unique diversity in various arenas, including food.
Laura Cuthbert from Wendy Wu Tours spoke about their journeys to India, while celebrity chef Sandeep Chatterjee and Manjit’s Chef de Cuisine, Varun Gujral tickled everyone’s appetites with brief revelations about the past, present and future of Indian cookery.
Australian travel writer and founder of the ‘Love Travel Guides’ series, Fiona Caulfield impressed all by expressing her love for India and its epicurean delights. All Bengalis in the audience were thrilled when they heard about her affection for Kolkata and typical Bengali cooking.

This event strategically aligned with AITTC’s ‘Know India Better’ program, with the goal of facilitating growth in bilateral tourism between India and Australia. Previously the Council has hosted events focused on other aspects of India including festivals, wildlife, yoga and medical tourism.